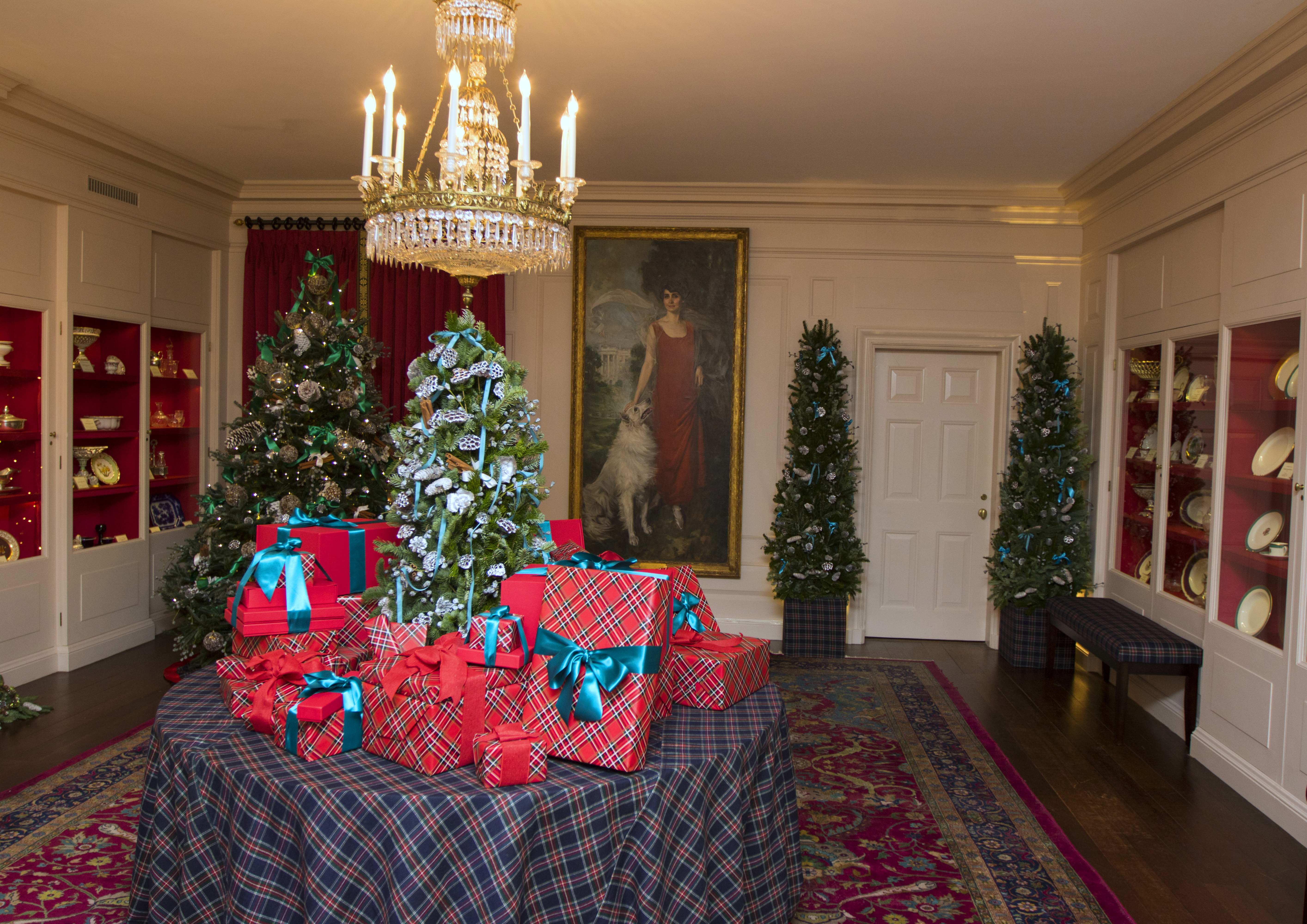 This holiday season, the White House decorations are reminiscent of a walk down the runway. Three rooms - the China Room, the Vermeil Room and the Library -- were designed by notable fashion designers.

Carolina Herrera -- whose dresses First Lady Michelle Obama has worn to formal events in the past, including the 2014 French State Dinner -- decorated the China Room.

The China Room boasts an eight-foot-tree, one of 62 total trees in the White House, and is adorned with Kailua Blue ribbons to represent the signature color featured on the Obama China Service. A center table in the room is draped in navy plaid and features boxes wrapped in red Carolina Herrera fabrics.

The Vermeil Room was decorated by designer Duro Olowu, another favorite of Mrs. Obama through the years. He chose to feature vintage printed African fabrics in his designs, including on the star-shaped tree stands for the room's two Christmas trees, which are decorated with a collection of 1920's French bisque porcelain dolls. The center display and mantelpiece have three additional miniature trees, made from faux seashells. Volunteer Patricia Yaddow, who helped decorate the room, said Olowu's team spent two and a half months making the seashell trees before bringing them to the White House.

Yaddow said before she volunteered at the White House she wasn't familiar with Olowu, but getting to work with him was a treat.

The Library was decorated by designers Carol Lim and Humberto Leon and pays tribute to the books held within the walls of the storied room. Each tree features a book as its tree topper and is adorned with handmade, custom ornaments that contain pages and quotes from the book above -- including original quill arrangements, handmade snowmen with quote scarves and origami trees.

The overarching theme of all the White House rooms this year is "A Timeless Tradition." The White House says the theme reflects "long-held traditions cherished across America and commemorates extraordinary moments that shaped the country during the past two centuries."

Those traditions include building a snowman - 56 snowmen and snowwomen stand outside in the White House garden representing every state and territory in the country. It also includes children's pastimes like cutting out paper snowflakes -- a collection of 300 of them hang from the East Colonnade.

Two traditions that appear in the décor year after year are the traditional White House Gingerbread House and the Blue Room Christmas Tree. The Gingerbread House sits in the State Dining Room, and this year was made with 150 pounds of dark chocolate rather than white chocolate, making it brown in color. According to the White House, this is the first time that the East and West Wings have been added to the gingerbread model, making the display quite large, weighing close to 500 pounds.

The Blue Room tree is an 18-and-a-half foot tall Fraser Fir that comes from the farm of Jay and Glenn Bustard in Lansdale, Pennsylvania. It is decorated in graduated red, white and blue globe ornaments, with red starting at the top and descending into blue, then white. Short messages to members of the military from their families flow around the tree on a large white ribbon.

The tree is the largest one in the White House and Volunteer Christina Donovan of Arlington, Massachusetts said it was a challenge to decorate -- in the process of putting up the ornaments, she said, there was definitely some "breakage."