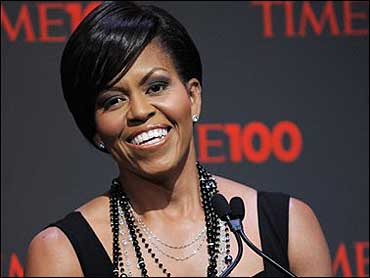 The fashion industry made it clear at its annual awards ceremony Monday night that it's looking to future stars to see it past the doldrums of the recession, shunning longtime favorites and honoring a largely new guard: Rodarte, Proenza Schouler, Alexander Wang - and Michelle Obama.

The Council of Fashion Designers of America's special tribute award went to the first lady, considered a new player in this world.

Noting her "meteoric rise as a fashion icon," CFDA president Diane von Furstenberg said Obama had "a unique look that balances the duality of her lives" in her roles as trusted adviser to her husband, President Barack Obama, and busy mother to their two daughters.

Although she was missing from the crowd at Alice Tully Hall at Lincoln Center for the Performing Arts, Obama's presence was felt throughout the star-studded ceremony, which included Heidi Klum and Blake Lively, both wearing Michael Kors, and Bradley Cooper in a Calvin Klein suit.

It took host Tracey Ullman less than two minutes in her opening monologue to mention the new first lady of fashion. As complimentary as she was, though, Ullman, a Brit, did say Obama shouldn't have worn a cardigan to meet Queen Elizabeth II.

Obama accepted her award via a pre-taped video speech. Wearing a crisp white button-down shirt and two strands of pearls, she honored fashion as an American "art form" with "ingenuity and craftsmanship that contribute so much to our economy and culture."

Laura and Kate Mulleavy, the California-based sisters behind Rodarte, seemed touched and surprised when Diane Kruger, in a red minidress with black beaded shoulders, announced that they had won the big prize of the night as the nation's top womenswear designers. It was only last year that they won the award for emerging talent.

"I'm just so shocked," Kate Mulleavy said. "It's so hard to be up here when we think where we started, making clothes in our house three years ago. We never thought we'd be a part of this world."

Jacobs didn't go home empty-handed, though. He was named the top international designer for Louis Vuitton.

Comedian and talk show host Jimmy Fallon read the names of both Italo Zucchelli for Calvin Klein and Scott Sternberg for Band of Outsiders in a tie in the menswear category.

Alexander Wang and his rocker look beat Jason Wu and Thakoon Panichgul, both favorites of Obama, for the Swarovski Award as the up-and-coming womenswear designer, while Justin Giunta for Subversive Jewelry won for accessories and Tim Hamilton won for menswear.

Industry icon Ralph Lauren won the first popular award after being chosen by 16,000 online voters as their favorite designer.

"What an honor to win this award," Lauren said in an e-mail to The Associated Press after the ceremony. "After 42 years, it is nice to be recognized this way."

The White Stripes' Jack White put on a sparkly brown suit to hand Anna Sui her lifetime achievement award, saying he especially admired her style for being timely instead of trendy.

Timberlake said that while he is particular about his wardrobe and had a good sense of what he likes and doesn't like, he's receptive to guidance from Moore.

"It turns out I'm a guy who could pull off wearing a kilt," he said. "Who knew?"