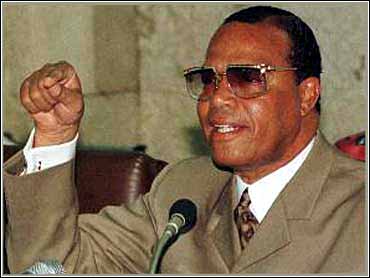 Nation of Islam leader Louis Farrakhan admits in a 60 Minutes interview broadcast Sunday and reported on Wednesday's CBS Evening News that his incendiary rhetoric played a role in the 1965 assassination of civil rights leader Malcolm X.

"I may have been complicit in words that I spoke leading up to February 21 [1965]," Farrakhan tells Shabazz and Wallace. "I acknowledge that and regret that any word that I have said caused the loss of life of a human being."

Shabazz later issued a statement thanking Farrakhan for acknowledging his role and said: "I wish him peace." However, she did not forgive him.

Malcolm X was only 39 years old when he was killed. This month, he would have been 75.

The former Malcolm Little was Farrakhan's mentor in the Nation of Islam—for a time, they both believed that the white man was evil and that the black and white races should live separately.

In 1964, Malcolm X revealed publicly that Elijah Mohammed, the leader of the Nation of Islam, was guilty of impregnating several of his teenage secretaries, in direct violation of his own preachings against sex outside of marriage.

Farrakhan was outraged. He called Malcolm X a traitor and wrote, two months before the killing, that "such a man is worthy of death."

Three men with ties to the Nation of Islam were convicted in the slaying in the Audubon Ballroom in Harlem on Feb. 21, 1965.

Shabazz, then 6, witnessed the shooting, as did Malcom X's wife and other children.

Farrakhan has denied ordering the assassination but later admitted to having "helped create the atmosphere" that led to it.

He was still speaking negatively about Malcolm X seven years ago.

However, Farrakhan, who has battled prostate cancer and other health problems, has struck a more conciliatory tone in recent years.

Earlier this year, Farrakhan publicly embraced W. Deen Mohammed, son of Elijah Muhammad, in an attempt to heal wounds that have split U.S. Muslims into factions.

Talks about the meeting between Farrakhan and Shabazz became serious around the time last year that Farrakhan was diagnosed with cancer, from which he is now recuperating.

The Nation of Islam leader's four-hour meeting with Shabazz and Wallace, organized at her request, took place at Farrakhan's home in Arizona.

Farrakhan told them that he "truly loved" Malcolm X and carried his picture after his death. Shabazz's body visibly stiffened, arms crossed over her chest, when Wallace quoted from Farrakhan's writings about Malcolm X before he died.

At one point in the interview, Farrakhan talked about the government, which had been spying on Malcolm X and other black leaders, as also playing a role in the murder.

Farrakhan said that the U.S. government spied on black leaders and were concerned about a "black messiah" who could unite the community. "This is bigger than the Nation of Islam," he said.

Shabazz, however, clearly laid the lion's share of the blame on members of the Nation of Islam.

Struggling to keep control of her emotions, Shabazz said that while she believed the FBI had something to do with her father's death, it was young black men who shot him.

"You can't keep pointing fingers," she said. "My father was not killed from a grassy knoll."

Farrakhan said: "I wish that Malcolm X were alive today, and not dead. Yes, it is true that black men pulled the trigger. We cannot deny any responsibility in this. Where we are responsible, where our hands are a part of this, we beg God's mercy and forgiveness."

"I genuinely hope that perhaps a healing can come to Miss Shabazz and her family," he continued.

Shabazz issued a statement this week.

"He's never admitted this before publicly," she said. "Until now, he's never caressed my father's children. I thank him for acknowledging his culpability and I wish him peace."

Shabazz's mother, Betty Shabazz, who died in 1997, had publicly accused Farrakhan of a role in the murder. She reconciled with him after her daughter Qubilah was charged in 1994 with lotting to hire a hitman to kill him. The charges were later dropped.

Shabazz told Wallace: "I did not know if I wanted to sit across from him. I didn't know if my heart could handle it."

The Battle Over Title IX