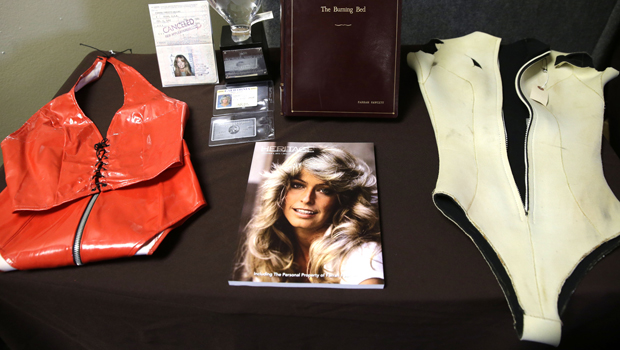 Separate auctions were held Thursday in Dallas: One featured Texas native Farrah Fawcett's jewelry and other memorabilia, while another had as its centerpiece the gray wool suit worn by Gene Kelly in "Singin' in the Rain."

Also included in the sale was her 1977 People's Choice Award for her role in "Charlie's Angels" ($20,625). Other items put up for auction by Fawcett's nephew, Gregory Walls of Houston, included scripts and costumes.

"Though Farrah Fawcett will forever be associated with the 1970s and that famous, famous hairdo of hers, she remains a beloved, respected, instantly recognizable Hollywood star just as much today," Margaret Barrett, director of entertainment and music auctions at Heritage, said in a news release.

Kelly's suit was purchased by the theme restaurant Planet Hollywood International for more than $106,000. Kelly wore the suit for the soggy featured dance in the 1952 movie musical.

Heritage officials said Planet Hollywood intends to display the suit at one of its properties but hasn't decided which one.

"Planet Hollywood has the world's largest assemblage of memorabilia and we're thrilled and excited to add this iconic piece to our collection," said Robert Earl, chairman and founder of Planet Hollywood International.

Gerald Sola, a retired postal worker, had kept the suit in a closet at his northern California home for decades after buying it at an MGM lot sale in 1970 for $10.

"I took it off the rack and looked at it," Sola said in a release issued by Heritage. "I noticed right away that there were water stains in the jacket. I knew right away what it was from so I bought it."