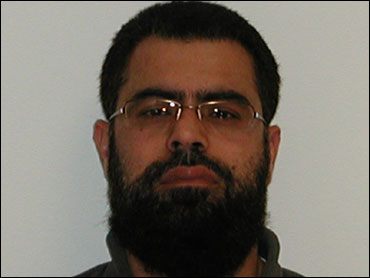 Farooque Ahmed, the Pakistani-born Virginia man accused of plotting to bomb Washington-area subway stations, lived in middle-class suburban comfort with his wife and their infant son. They held steady jobs in northern Virginia's technology industry and mostly kept to themselves.

They got along with neighbors, sometimes even cooking saffron rice and chicken for them. Ahmed enjoyed fishing, and his English-born wife, Sahar Mirza-Ahmed, was part of a group of "Hip Muslim Moms." Both were on social-networking sites.

Yet Ahmed had a burning desire to join the global jihad, according to federal authorities. Beyond his alleged terror plot, which involved scouting Metro stations that he believed al Qaeda would bomb, authorities said he wanted to travel to Afghanistan to kill American soldiers.

Ahmed, 34, emigrated around 1993 to the United States and later became a citizen, according to an FBI affidavit. He lived in Staten Island, N.Y., and earned a bachelor's degree in computer science in 2003 from the College of Staten Island before he moved to Virginia.

His LinkedIn page refers to a "political issue" between the computer science and engineering departments at the City College of New York that prevented him from receiving a master's degree, but officials there said there were no records of Ahmed ever being a student.

He also wrote on the site that he was studying risk management and data security at Aspen University, an online school based in Denver. The school's president said he had been accepted as a student but has not taken any courses.

In Virginia, he drove a green 2005 Honda Accord, accruing a handful of traffic tickets. His most recent job was doing network engineering on a contract basis for Ericsson Services Inc. He previously worked on contracts with Verizon and Sprint, according to his LinkedIn profile.

He had money in the bank, according to the affidavit, which said he spoke about sending $10,000 to foreign terrorists - in $1,000 increments to avoid arousing suspicion. But when he made an initial appearance in federal court, he said he could not afford a lawyer.

Ahmed and his wife lived in a rented three-story brick townhouse in Ashburn, a bedroom community near Washington Dulles International Airport. Neighbors said they were polite, but reserved.

Marc Otterback, who lives next door, described the family as "pretty reclusive." He remembered commenting that a dinner they were cooking smelled good, and family members brought saffron rice and chicken to his home that evening.

"I wouldn't say I knew him, though," Otterback said. "He never discussed politics with me; he never offered much of anything."

"We saw them get in and out of their cars. We said, 'Hi,' and so did they," Nicholson said. "There was nothing too abnormal. They just really kept to themselves."

Mirza-Ahmed was born in Birmingham, England, and was still working in the United Kingdom in the mid-2000s, according to her LinkedIn profile. Mirza-Ahmed's profile on meetup.com, which included photos of her wearing a hijab and holding her son. Both profiles have been deleted.

Mirza-Ahmed had been listed as a co-organizer of Hip Muslim Moms, a social and support group for women with children under 5 years old. She joined shortly after moving to Virginia, and brought her son to playdates, group organizer Esraa Bani said.

The group, Bani said, is very liberal, and members tend to be young professionals. Mirza-Ahmed wasn't the most outgoing, but she was well-liked, said Bani, who was "shocked and shaken" by the allegations.

"They're a regular, everyday family," Bani said. "That's why it's very shocking to hear this."

It was unclear where Ahmed worshipped. Imams at two large mosques in the area said they had no records of Ahmed and they were quick to condemn his alleged actions.