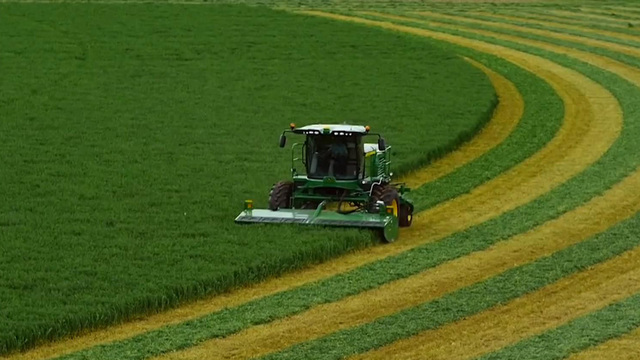 Farming is big business across America, and many tractors are equipped with technology that companies like Google one day hope to put on the road, reports CBS News correspondent Adriana Diaz.

Using GPS satellite technology, thousands of miles in space, the 20-ton machines are able to steer themselves. As long as a driver is in the cabin, the machine can take over, something car companies have been trying to accomplish for years.

John Teeple who runs John Deere's technology group, said they get a chuckle at all the excitement over self-driving cars.

The farm equipment company has been making machines that drive themselves for almost 15 years. Instead of keeping their hands on the wheel, multi-tasking farmers can focus their attention on business.

Randy Madden, a 4th-generation farmer, uses driverless tractors to work his 2,500 acres of corn fields. He said his hands have been off the wheel for 10 or 12 years.

"It (was) a watershed moment in our farming life," Madden said.

Here's how it works:

A driver programs the route and the GPS-based technology does the driving, down to the inch, avoiding missed spots and repetition. It's designed to save time, fuel and money, but even still, assisted driving can cost up to $20,000 per machine.

Also, the driver still has to be at the wheel, because with no outside sensors, the only way to avoid a collision is if a human intervenes and takes the controls.

Teeple said the technology has been available in industrial settings sooner because the machines are operated on private land in remote locations.

"So certainly the challenges associated with rush-hour traffic aren't a challenge when you're operating a tractor in a 100-acre field in central Iowa," he said.

But as farming becomes more automated, agriculture jobs may be on the line. Moving farm equipment online may also make operations vulnerable to glitches and hacks, but John Deere said it has encrypted security measures in place.

Homeowners may be next to get a helping hand. John Deere is developing self-driving lawn mowers in Europe, while carmakers and Google rush to get autonomous cars on the road.

Teeple said they've talked to Google on a few occasions about "a variety of different technology topics," but would't give details.

John Deere said they're still at least decade away from a fully driverless tractor. In the meantime, almost all of their new farm equipment has assisted steering built in to allow farmers to focus on running their business instead of running a tractor.