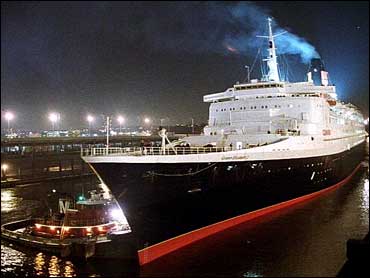 It's been said that nothing made by man is granted such immortality as an ocean liner.

They are part of the history of their time, and names like the Titanic, the Mauritania and Lusitania, the Queens Mary and Elizabeth, live on in nautical lore long after they have been scrapped, scuttled or sunk.

For more than 30 years, there has been just one true ocean liner left plying the North Atlantic: Queen Elizabeth 2. She is about to be replaced on the trans-Atlantic route by a new ocean going behemoth, and retired to cruising the warm waters of the Mediterranean.

When 60 Minutes found out she was making her last scheduled trip between New York and London, we couldn't resist booking passage for one of the queen's last crossings. Correspondent Steve Kroft reports.

On a crisp Sunday afternoon, the QE2 was leaving New York Harbor, bound for the high seas with nearly 3,000 souls on board - for one of the last civilized adventures. It would take five and a half days across the North Atlantic, a voyage into another era.

For most of the 20th Century, this was the only way to get from Europe to America, whether you were an immigrant in steerage class, or rich and famous in a stateroom. Newsreels gave a sense of excitement to the journey, and Hollywood added the glamour.

But by 1967, when the QE2 was launched, she was already an anachronism - a steamship in the jet age.

Airplanes like 707s and DC8s had turned oceans into something to fly over in six hours, not to be tossed about on for six days. It seemed the world had passed the ship by, but she somehow managed to survive, offering grace over pace.

Now, in a world where traveling from point to point has become a series of annoyances -- from overcrowded planes and airports to constant security inspections -- this is again the ultimate in civilized travel.

Where else can you stretch out and relax? Have cocktails with the captain in black tie and ball gowns? And share the experiences of the Rockefellers and royalty?

Wine Steward Tommy Gallagher has served most of the Royal Family but refuses to name his favorites: "I'd say they're all my favorite."

And what did the queen drink? "Well, she wouldn't drink wine; she like the gin and tonic," recalls Gallagher. "Yeah. Heavy on the gin, easy on the tonic. Not too many ice cubes, darling."

For many, it's the trip of a lifetime - a way to celebrate an anniversary, or to get engaged. For others, it's the mystery and romance of the sea.

Ian Bell grew up in Glasgow, not far from where the QE2 was built. He immigrated to Canada on a steamer. "I think I've got salt water in my veins. Coming from a seafaring nation, and all my family has put out to sea at some point or another," says Bell. " And I've been a sailor all my life. I just love being on the open water."

What is it about this ship that he likes?

"It's a grand ship. It's a proper ship," says Bell. "It's built to take anything that the seas can throw at her. Anything. Very, very heavy seas, ranging from, you know, like a force 10 to the 100-year wave."

Even today, the QE2 is a marvel of steelwork and engineering, still the swiftest merchant ship afloat, faster in reverse than most cruise ships full speed ahead. There is a cinema, a synagogue, hospital and operating room, mortuary, desalinization and garbage-processing plants, plus a rabbit warren of 950 rooms spread over eight decks, ranging from cozy to penthouse suites.

There are 1,700 passengers and 1,000 crewmembers moving 30 miles an hour across the most dangerous ocean in the world. We are reminded of this by a mandatory lifeboat drill before the last of the sea birds desert us off the coast of Newfoundland. For the next three days, the only sign of life we see is a passing tanker. In the 1800s, one ship in six failed to reach her destination.

There is ice in the spring, rough seas in the winter, hurricanes in the fall, and fog in the summer. But we are blessed with perfect weather and calm seas as Capt. Ray Heath takes us through the deepest part of the North Atlantic.

"Three miles of water right underneath us," says Heath. "We might have some submarines down there we don't know about."

She still flies a British flag, and is available to Her Majesty's service in times of war or emergency. She was commandeered by the queen during the Falklands War to haul troops to the South Atlantic.

But Bernard Cornwell, one of Britain's most famous authors, says the Admiralty wasn't foolish enough to put her in harm's way: "They're not idiots, if the QE2 had been sunk by an Argentinean fighter bomber, they'd have won the war, regardless of what happened to the Falkland Islands. Oh, no, they were terrified of losing this. Terrified."

Cornwell, who writes historical fiction, looks out at the North Atlantic and sees a graveyard filled with young sailors from both World Wars. "I spent a lot of my professional life visiting battle fields," says Cornwell. "Because every time I'm on the QE2, I'm actually crossing one of the 20th Century's great battlefields."

The distances and remoteness of it all translate into solitude. No cell phones or beepers, no plaintive messages to call the office. You are out of touch. Unavailable. There is ship-to-shore radio for emergencies and there is a computer room, where you are welcome to try sending or checking your e-mail. But it's not recommended for the impatient or thrifty.

By mid-ocean, you are 1,000 miles from anywhere. There is nothing to see but the sky and water; nothing to hear but the wind and waves. The only pasttime is passing time.

Margaret Bell summed up the routine: "So you get up. And then you think, well, where should we go for breakfast. So, we go and eat. And then we go for a walk. And then we sit."

But it's not everyone's cup of tea. Oscar Wilde found the Atlantic over-rated. Samuel Johnson called it imprisonment, with a chance of drowning. And one Broadway actress once asked: "When does this place get to London?"

There are exercise classes or you can promenade around the boat deck. Five laps equal a mile. You can hit golf balls into a net, play shuffleboard or learn one of those things you have never found the time for.

Like kerchief tying, or ballroom dancing from one of the gentlemen hosts on board, to dance with unattended ladies. But these are just preliminaries to dinner, the main event. It is formal four out of the six nights, creating an aura of extravagance that is matched by the cuisine. Thursday, it was Beef Wellington and Cherries Jubilee, and enough Sevruga Caviar to make the QE2 one of the Russian's largest single customers.

It has the feel of a gracious, old hotel -- a few years past her prime, but still luxurious and comfortable, with impeccable service.

There is one crew member for every 1.7 passenger, including butchers, linen keepers, engine wipers, able seamen, chefs, wine stewards and butlers. Gordon McKay has been in service to first class passengers since the QE2's maiden voyage. If you need a suit tailored on board, or your underwear ironed, McKay is the man to see.

"I had a lady many, many years ago, and I used to blanche 60 grapes for her every day for six weeks. In hot water, and take the skin off. That's what she liked," says McKay.

"I've learned all these tricks over the years. And when I was in service, when I was 15 years old and started off cleaning 50 pairs of shoes every morning, I've been all the way through the business."

No one appreciates the quality of service more than Bea Muller, the QE2's only permanent resident. When her husband died on board during a world cruise, she sold everything she had and moved on board.

Does she ever get stir crazy?

"Oh no, I can never do everything that there is to do here. I can't see to drive anymore. And I don't have any grandchildren," says Muller. "And if I were home alone with nobody, I'd be dead. I'd be bored out of my mind."

Now in her mid-80's, she lives in a snug, little cabin mid-ship, and has everything she needs.

"This being the last crossing after all these years of wonderful crossings, it's a very sentimental time," says Muller. "She's the last of her kind. And she's gracious and she's the world we grew up in a way. But she's a little town. She has everything you can think of, all the fun things you want to do, quiet things you want to do, lovely music."

Bea is not much interested in the new ship. She plans to spend the rest of her days aboard the QE2 in her semi-retirement, cruising the Mediterranean and the fjords of Scandinavia.

"I'm booked now through May 1st and probably all of 2004," says Muller. "And he's working on the 2005 world cruise because that's, no, I have no guarantee that this will last forever. But I hope so."

Muller and just about everyone else was asleep when the QE2 tied up in Southampton before dawn on a Saturday morning. There were no bands, no celebrations.

That will happen in April when she passes the flag to her successor, the Queen Mary 2, which is twice as big, carries 900 more passengers, and looks very much like a cruise ship in a tuxedo. She was built in France, not Britain, by Cunard's latest owner, Carnival Cruise Lines. Carnival is steering the ship towards a younger crowd and the booming cruise business, not just trans-Atlantic crossings. A different ship for a different era.

For the QE2 and all of those who shared her world and her journeys over the past 35 years, it's a reign and a passage worth noting.

The secret Nazi archive that documented the Holocaust
Thanks for reading CBS NEWS.
Create your free account or log in
for more features.
View CBS News In
CBS News App Open
Chrome Safari Continue
Be the first to know
Get browser notifications for breaking news, live events, and exclusive reporting.