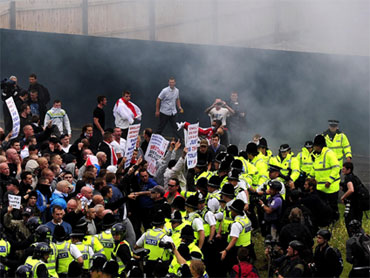 About 700 protesters from a far-right group have clashed with hundreds of riot police in northern England.

The English Defense League activists threw bottles, rocks and a smoke bomb at the riot police after the authorities penned in the protesters to keep them away from an opposing demonstration by a leftist group, United Against Fascism.

No injuries were reported in the city of Bradford on Saturday, but police said five people were arrested.

The English Defense League opposes what it calls the spread of Islam, Sharia law and Islamic extremism in England.

It was holding its protest in a city that contains one of Britain's largest Pakistani communities.

In 2001, riots occurred there between whites and South Asian immigrants.