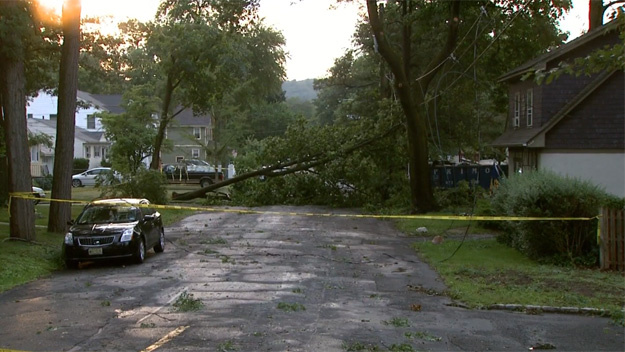 FANWOOD, N.J. -- A woman was electrocuted Monday afternoon when wires fell down on her car in Fanwood, New Jersey during storms that swept through the area.

CBS New York reports that around 4:30 p.m., witnesses said a woman was driving down Midway Avenue in Fanwood, when she tried to avoid a tree that had fallen before.

Wires fell down on the woman's car, and she was killed by the live electricity when she attempted to get out of the vehicle, officials said.

"I saw this car, this white car, and the body next to the car," said Gary Gurzo of Fanwood.

Gurzo came upon the tragic scene as he came out of his home.

"The line was on the driver's side, and she wanted to escape from the passenger's side," Gurzo said. "As soon as she stepped out of the car, she was electrocuted because the wire was hanging in the puddle next to the car."

Another witness, Eliberia Delgadillo, was overcome with sadness as she recalled being unable to help the victim.

Delgadillo and her 12-year-old daughter were driving behind the woman when they witnessed the horrific scene.

"We saw that the terrible storm was hitting and then we saw that the tree fell... there was a wire that fell from the top, and it fell on top of her car," said Delgalillo's daughter, Camila Chacha.

Witnesses said the electricity had to be shut off before first responders could get to the woman.

"They were trying everything for long, long minutes but they were not able to do anything," Gurzo said.

"It was just a tragic situation," said witness Cam Smith. "It was terrible to see."

Delgadillo and her daughter brought flowers and a candle for the woman who died, it was a tragic storm that they will never forget.

"We felt really bad, and we just saw everything, so we felt like she was part of our family," Camila said.

Police said if you ever find yourself in a situation like the woman did in Fanwood, the best idea is to call 911 and stay in the car.

The storms also took down trees in many other communities and caused widespread power outages.