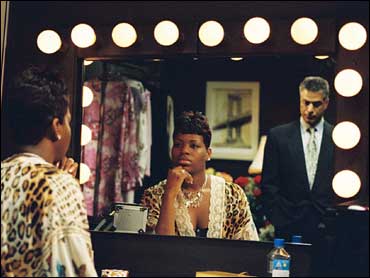 The father of "American Idol" winner Fantasia Barrino has filed a $10 million libel suit against the publisher of a book about his daughter, alleging that it contains "false, exaggerated, sensational, intentional and malicious untruths."

In papers filed Tuesday in U.S. District Court in Manhattan, Joseph Barrino is seeking damages from Simon & Schuster, which released "Fantasia: Life Is Not a Fairy Tale" in 2005. The book was made into a TV movie, starring Fantasia, that aired on the Lifetime network in August.

Among the details disputed by Joseph Barrino: that he was hostile to the music industry, that he asks his daughter for money when she visits him, that his children's musical careers were more important than their education.

"The unfortunate publication of Fantasia's life story by Simon & Schuster seeks to capitalize on her American Idol success through disparaging certain members of her family. The lawsuit seeks to redress these wrongs and restore the integrity of the family members," Joseph Barrino's attorney, Kendall Minter, said Tuesday in a statement.

Although Simon & Schuster's Web site lists Fantasia Barrino as the book's author, the lawsuit alleges that the singer's grandmother, Addie Collins, was the ghostwriter. Fantasia Barrino was not listed as a defendant.

Barrino reveals in her book that she was functionally illiterate and had to fake her way through some scripted portions of the televised talent show.

Simon & Schuster spokesman Adam Rothberg said Tuesday that the company has not had a chance to see the court documents and would not comment.

The 22-year-old Barrino, a high school dropout and unwed mother at age 17, was the "American Idol" winner in 2004, the show's third season. Her debut album, "Free Yourself," came out the same year and received four Grammy nominations.
By Hillel Italie

Will Smith opens up about "horrific night" of Oscars slap
Thanks for reading CBS NEWS.
Create your free account or log in
for more features.
View CBS News In
CBS News App Open
Chrome Safari Continue
Be the first to know
Get browser notifications for breaking news, live events, and exclusive reporting.