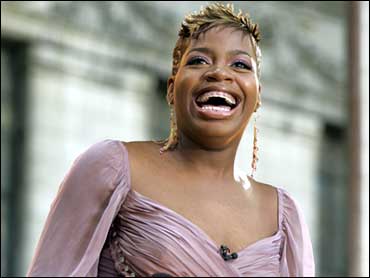 Funny how a new star can jolt a long-running show. In a good way.

Consider Fantasia, one of the ubiquitous "American Idol" alums who have traveled to Broadway in the last several seasons. The performer is now starring as Celie, the put-upon heroine of "The Color Purple," a musical version of Alice Walker's Pulitzer Prize-winning novel. She gives the production new heart, soul and star power.

More important (at least for the producers), her engagement at the Broadway Theatre, where the show is now midway through its second year, has helped the box office. And you can see why in the woman's performance.

Fantasia has a natural stage personality, a direct, sweet charm that gets her — and theatergoers — through the more bumpy, convoluted aspects of Marsha Norman's overstuffed stage adaptation. The story follows Celie's four-decade journey from horrific childhood to abusive marriage to independence and self-esteem.

The actress exudes a gentleness that makes the woman's stoicism, some might say passivity, seem palatable and, what's more, heartbreaking. And we haven't even gotten to her way with the songs.

The eclectic score by Brenda Russell, Allee Willis and Stephen Bray is, more often than not, big and brash, just right for the pyrotechnics favored by veterans of the "American Idol" flat-out style of singing. And Fantasia knows how to let loose, particularly in her final number of affirmation, "I'm Here." It pretty much brings down the house, earning cheers and a few tears.

Many of the supporting players have changed, too, since "The Color Purple" first opened in December 2005. Alton Fitzgerald White has the difficult assignment of portraying Celie's abusive husband, known as Mister. He could be just another stock villain, but the actor invests the role with a plausibility that makes his late-evening conversion into a semi-nice guy seem possible. Plus the man has a robust voice.

But then "The Color Purple" is chock full of impressive singers: from the trio of gossipy church ladies (Charlotte Crossley, Rosena M. Hill and Mai Nkenge Wilson) who comment on the action to NaTasha Yvette Williams who portrays Sofia, the gruff, no-nonsense antithesis to the pliant Celie. The role, played in the 1985 film version by Oprah Winfrey, is one of those surefire, comic crowd-pleasers, and Williams nails every laugh. She is assisted in her laugh-getting duties by the appealing Chaz Lamar Shepherd as the woman's appropriately deferential husband, Harpo.

The one major holdover from the original cast is the vibrant Elisabeth Withers-Mendes as the sexually adventurous chanteuse, Shug Avery, one of two women who hold particular sway over Celie. The other is Celie's saintly sister, Nettie, played by Darlesia Cearcy, who ends up doing missionary work in Africa.

That exotic setting is an excuse for some of the musical's more unnecessary choreography. Donald Byrd's movement for Withers-Mendes and a chorus of juke-joint regulars is much more inviting.

Director Gary Griffin has his hands full trying to keep the thick plot from slowing down the evening's momentum, but Fantasia's galvanizing presence, particularly her emotional connection to the material, makes "The Color Purple" soar.