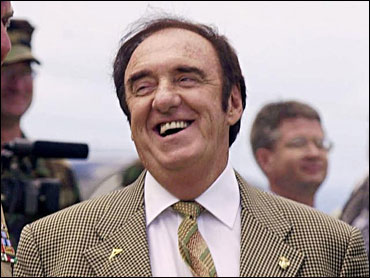 Is it really the Indy 500 without Jim Nabors?

The 76-year-old actor - best known for his 1960s sitcom role as Gomer Pyle and his singing of "Back Home Again in Indiana" at the Speedway nearly every year since 1972 – won't be at the big race this Memorial Day weekend.

Not in person, anyhow – but he does hope to address the Indy crowd via satellite hookup from his macadamia nut farm home in Hawaii, and the plan is for fans to then sing the song to him right before drivers are exhorted, as is traditional, to "start your engines!"

Other celebs will be there in person, including "Grey's Anatomy" heartthrob Patrick Dempsey, driving the pace car; Super Bowl MVP Peyton Manning, who'll wave the green flag; and Florence Henderson – best known as the mom on "The Brady Bunch" although it was a musical which put her career on the map – who'll sing "God Bless America."

Sunday will be the first time since 1986 that Nabors, who made a bundle on his folksy charm and classical voice, won't actually be at the mike in Indiana – which isn't, by the way, his home.

Born in Alabama, Nabors became an Indiana icon more or less by accident.

Thirty-five years ago, when Speedway owner Tony Hulman first lined up Nabors for the opening ceremonies, he thought he'd be singing "The Star-Spangled Banner."

The band director soon set him straight, asking with some concern whether Nabors knew the words to "Back Home Again."

The song, which waxes poetic about new-mown hay and candlelight through the sycamores, is an example of musical thievery, lifting liberally from the mostly forgotten official state song, a somber ode about the deaths of a mother and sweetheart.

While the words are not joyful, the fan reaction – and the applause "Back Home" gets – always is, along with the cheers for Nabors himself.

"I've never thought of that as relating to me," Nabors said of the crowd's reaction. "It's always relating to the song and to the race. It is applauding for the tradition of the race and the excitement."

"Back Home Again" - originally titled "Indiana" - debuted as part of the Indy 500 in 1946. That year, James Melton, a New York Metropolitan Opera performer and car collector, took the microphone about 45 minutes before the race, which was the first run since a four-year break during World War II.

"It just got a lot of positive comments, so they invited him back to do it again the next year," said Donald Davidson, the Indianapolis Motor Speedway's historian.

Within a few years, organizers moved the song into its current spot in the Memorial Day weekend tradition - right between the playing of taps and the command to start engines.

Mel Torme, Dinah Shore, Morton Downey Sr., Peter Marshall and others took turns at the microphone over the years. Many times, the decision on who would perform the song with the Purdue University marching band waited until race day.

"They were just last-minute things," Davidson said. "If there wasn't a celebrity that was available to do it, then Purdue would have one of their own people."

That changed once Nabors gave the song his voice.

"The first year that he did it, I remember a lot of people saying 'Oh, yeah, Gomer, what's he doing here?' People didn't know he could sing," Davidson said. "After about three, four years, he became a tradition and people were unhappy when he wasn't doing it."

James Hanley and Ballard MacDonald wrote "Back Home Again" in 1917 after they received permission from the publishers of "On the Banks of the Wabash," written 20 years earlier, to use two bars of its music, said Clayton Henderson, a biographer of "Wabash" composer Paul Dresser.

Hanley and MacDonald borrowed a bit more than two bars, however. The refrain of their song parrots references in "Wabash" to the smell of new-mown hay, candlelight through the sycamores and moonlight along the Wabash, a river that winds nearly the full length of Indiana.

Dresser died in 1906, and the Indiana Legislature in 1913 designated "Wabash" as the state song.

"Back Home Again" became a common jazz tune, frequently played by Louis Armstrong and others, but little attention was apparently paid to the similarities between the two songs until the newer one was included in the 1940 film "Remember the Night." Henderson said Dresser's brother threatened to sue for copyright violation, but that effort was complicated by the agreement between the "Back Home Again" composers and Dresser's publishing house. He eventually dropped the matter.

"I wonder whether a court would call it plagiarism these days. I suspect they might," said Henderson, a retired music professor at St. Mary's College in South Bend.

Despite the similarities, the two songs evoke different feelings, said Geoff Davis, a teacher and musician who leads Indianapolis' Key Strummers, a youth ukulele band that played a rousing version of "Back Home Again" on the Statehouse steps during the 2003 funeral of Gov. Frank O'Bannon.

While "Wabash" is a beautiful song, he said, "It is really a sad song."

"It is about mom dying and there's nobody looking out the doorway anymore when I come home," Davis said. "In the next verse, somebody else is dead."

Henderson said he played "Back Home Again" with jazz groups long before he knew about "Wabash" but has come to prefer the older song, which is little-known today.

"I would like to think it does live on in 'Back Home Again in Indiana,"' he said.

Davis believes it does.

"Maybe it's because they stole the lyrics that it made the transition so well," Davis said. "People are essentially singing the same song, but it is a lot easier to sing, a lot more fun to sing."

While the greatest prominence for "Back Home Again" comes from the race, it reaches far beyond, said Judy O'Bannon, Indiana's former first lady.

"I definitely don't think of it as a thing that says 'Oh, yeah, we're just sort of cornfields and sweet people who are living in the past. I don't see it that way at all," she said. "I see it as a remembrance of where we've come from that springs us to the future."

There is still a spot for "On the Banks of the Wabash" at the Indianapolis 500. The Purdue band will play it from near the start-finish line - but more than an hour before the race starts and without anyone singing the lyrics.