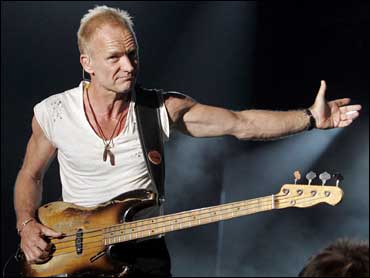 Arya Mirsajedin, a 20-year-old student at the University of Georgia, wasn't even born when The Police released their last studio album in 1983.

But he knew every tune they played Saturday night, and he knew he was witnessing a piece of pop culture history when the rock trio appeared at the Bonnaroo Music Festival.

Fronted by the seemingly ageless Sting, The Police were the headliner for this year's festival, which began Thursday and ended Sunday night. Other big acts included The White Stripes, Tool, Widespread Panic, Wilco, Ben Harper and The Flaming Lips.

Add in the myriad of nonmusical attractions, from movies to comedians to fire eaters, and Bonnaroo took on the air of a carnival midway. The sheer volume and variety of entertainment was overwhelming.

As Ziggy Marley channeled his late father, reggae legend Bob Marley, on one of the big stages, three burlesque dancers performed a PG-13-style striptease in the "Bonna Rouge" tent and footage of Jimi Hendrix smashing his guitar to pieces played during the "Monterey Pop" film playing in the cinema.

There was an air-conditioned jazz club where patrons sat at candlelit tables, a real luxury given the Port-a-Potties and makeshift showers outside. A few dozen revelers wearing headphones danced at the "Silent Disco" — a strange sight even for this place, where the strange is common. The whole festival smelled of cooking grease, cigarette smoke and sweat.

"There's a little of everything here. It's like a small country," Juan Rosales remarked as he stood shirtless and took it all in.

Rosales, 21, of Gainesville, Ga., had read about Bonnaroo and seen pictures of it, but experiencing it for himself was something else entirely. He had wanted to make the trip since the festival started six years ago but couldn't afford it.

"Now that I've come, I know to start saving this year for next year," he said.

2No one could escape the heat, though everyone tried. People slept in whatever shade they could find and guzzled bottled water and cold beer. Clouds of dust billowed from the parched ground, causing many to tie scarves around their mouths and noses like Old West train robbers.

"We could really use some rain," said Bonnie Bronson, a 34-year-old waitress from Suffolk, Va., as she stood with wet hair outside a large trailer where people washed up and filled bottles and jugs with water.

The heat with the dust makes it hard to breath. But everyone is having a good time," added her friend, Jason Smith, a 30-year-old brick mason.

As of Sunday morning, there had been one death, 25-year-old Cody L. Conover of Lancaster, Ky. Authorities say it will probably be several weeks before they know the cause, but they are looking into drugs and heat as possibilities.

Neither the heat nor the dust mattered much to Mirsajedin as he waited for The Police. He has all the group's music on vinyl.

"I probably would have come anyway," he said, "but when I heard The Police were going to be here, it sealed the deal."
By John Gerome