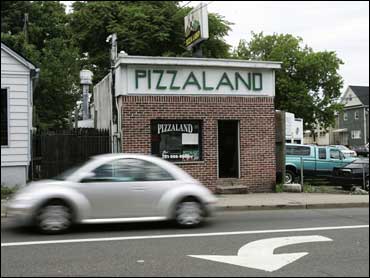 Cut to black? Not a chance for fans of "The Sopranos."

Almost two weeks after the series finale, the addiction to the show seems stronger than ever, with legions of fans making a journey to Jersey to see real-life remnants of the hit TV mob drama.

For many, their obsession starts at the place where the series ended: Business is booming at the diner where lead character Tony Soprano sat with his family in the controversial series finale.

Fans not only want to eat at Holsten's (actually an ice cream parlor in Bloomfield), they want to sit in the same booth where Tony, the fictional New Jersey mob boss, played the Journey song, "Don't Stop Believin'."

"The phone just rings constantly all day from people wanting to make reservations," said co-owner Chris Carley. "They ask 'Can we reserve the booth? Can we get a T-shirt?' "

Carley, who watched the final scenes filmed there over two days, fields calls from fans wanting to talk about the ending. Customers who want to relive Tony's last meal can buy some of the onion rings he raved about (for $2.50), but they cannot listen to the juke box, which was a prop for the show.

"It's just so funny that people want to sit in that booth," Carley said. "A lot of people are taking pictures."

The Emmy-winning HBO show explored the life of the fictional Jersey mob boss and his family, and scores of scenes have been shot across the Garden State since it debuted in 1999.

The series buzz-inducing final scene ended abruptly with the screen suddenly going black as Tony and his family sit down to dinner at Holsten's, leaving fans guessing about what happens next.

Part of "The Sopranos" fascination is fueled by the lack of a real ending, said Roland T. Rust, chairman of the marketing department at the University of Maryland.

"The fact you don't have that resolution makes it more difficult for people to let go," Rust said.

Some fans are flocking to a "Sopranos"-themed bus tour. With 47 sites, it's one way fans can still connect with the show. The cost is $42 per person, which includes a cannoli (a nod to "The Godfather"). Afternoon tours for the next two weekends are already sold out.

The tour begins in Midtown Manhattan and transports up to 54 people through the Lincoln Tunnel into Jersey (the start of Tony's journey in the opening credits). Fans see the fictional Satriale's pork store in Kearny and the diner under the Pulaski Skyway in Jersey City where Tony's nephew, Christopher, got shot.

2For many the highlight is Satin Dolls, a strip club that fronts for the "Bada Bing," on Route 17 in Lodi.

"People are really in withdrawal," says Georgette Blau, president of On Location Tours. A third tour has been added, and a fourth is likely to begin next month, Blau said.

Satriale's, which is one of the most popular stops, is slated to be whacked come August or September.

Manny Costeira, the owner of the building who leased it to HBO, is demolishing it to make way for nine condos and a garage, aptly named "Soprano Court."

Costeira said construction will begin in the fall or spring and fans can buy a piece of the building.

"We'll be salvaging the stones off the building for those people who are totally heartbroken about the pork store going down," he said.

The obsession with "The Sopranos" doesn't just include New Jersey.

Music downloads of Journey's "Don't Stop Believin' " jumped 371 percent in the week after it played in the show's final scene, according to Nielsen SoundScan.

Presidential candidate Hillary Rodham Clinton's campaign borrowed from the series ending when it unveiled its new campaign song with a Web video spoof of the "Sopranos" exit.

Even Pizzaland, a shack that zips by in the show's opening credits, has seen a huge spike in business from fans trying to still starving for the show.

The store got so busy fielding requests for custom pizzas from across the country — the pies are sent by mail in dry ice — that it had to shut its doors to walk-in customers five days before the final episode aired.

"We had to stop answering the phones," said owner Todd Maino.

His employees worked for 48 hours straight to accommodate 800 to 1,000 orders before the finale, and they're still taking 300 to 400 weekly orders for the thin-crust pizza.

Pizzaland shipped two pies to Jeri Hershberger last week in Spokane, Wash. The 56-year-old is still looking for a connection to the show.

"It never was finalized," she said. "It keeps people's imaginations going."