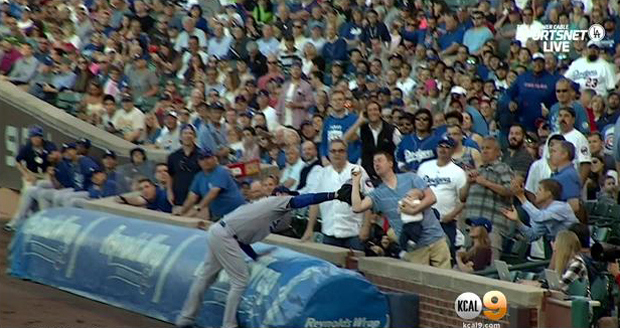 A photo of a baseball fan who caught a fly ball with one hand while holding a baby may have gone viral on social media from spectators at Wrigley Field, but it has also brought up safety issues for baseball games, CBS Los Angeles reports.

Keith Hartley, a Chicago man who was carrying his 7-month-old son, Issac, in his left arm reached over a rolled-up tarp at Wrigley Field and caught a popup from the Cubs' Jason Hammel on Tuesday. Although fan interference was argued, the catch was shown to cheering fans on the ballpark's screens.

"I was just feeding him and I saw the ball coming our way and held on to him and made sure I protected him and I stood up and it kind of just fell in my hand," Hartley said.

After a brief delay, the call was reversed and Hammel was ruled out.

But instant reaction on social media raised questions as to how safe it is for fans to sit in seats so close to the field with infants or small children.

Chicago Tribune writers had differing views on having the baby so close to potential danger.

"Bob Uecker may think he belongs in the front row, but a baby doesn't," Hersh wrote.

But Shannon Ryan disagreed: "After reading Keith Hartley's quotes about why he reached out for the ball - and why he was even in position to do so -- I realized he was following his parental instincts. And he has good ones.