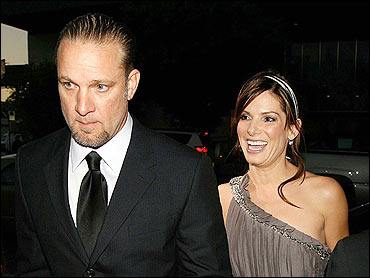 A fan of Sandra Bullock was charged Thursday with stalking the actress and trying to run down her husband, TV motorcycle maker Jesse James, outside their Orange County home.

Marcia Diane Valentine, 46, of Huntington Beach, was charged with one felony count each of aggravated assault and stalking. She could face up to four years and eight months in prison if convicted, the district attorney's office said in a statement.

It was unknown whether Valentine had an attorney and she could not immediately be reached for comment. She remained free on $25,000 bail pending a scheduled May 22 arraignment in Westminster.

Last week, Bullock obtained a restraining order barring Valentine from contacting or coming near her home, family or work for three years.

The actress testified in court that on five occasions Valentine left in her yard palm fronds adorned with "weird signs" and "pieces of animal fur."

Prosecutors contend that several times Valentine lay down in front of the couple's driveway until ordered away.

Bullock testified that after Valentine was spotted April 22 outside the couple's home in Sunset Beach her husband went outside and tried to write down the woman's license plate.

"When James went outside, Valentine is accused of screaming obscenities ... getting into her silver Mercedes-Benz, and reversing her car in an effort to run over James," the district attorney's office said.

She narrowly missed James, reversed again in an effort to run him down and then fled, prosecutors contended.

James, host of TV's "Monster Garage," was not hurt. Valentine was arrested the next day by sheriff's deputies while driving in the area.