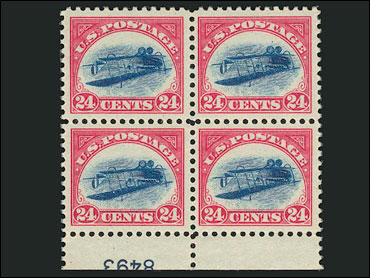 It's probably the most famous postage stamp ever.

More than 90 of the stamps still exist, but there is only one plate block, and Wednesday evening, October 19, 2005, it sold at an auction in New York for $2.97 million, including the buyer's commission.

The buyer was Charles Shreve of Shreves Philatelic Galleries, who bid on behalf of a private collector residing in the United States. Shreve told CBSNews.com the man has a substantial U.S. collection and is well-known within his field.

The price paid for the unique plate block of four is a new auction record for a U.S. stamp. The second highest price is $935,000, which was paid for a 1-cent Z Grill stamp in 1998.

"I think it's an exciting time in the stamp business, and I can't imagine offering a more exciting item," Trepel said before the sale.

In 1918, collector William Robey purchased a sheet of 100 of the first airmail issue, a 24-cent stamp showing the Curtiss JN4-H biplane, at the main Washington, DC, post office for $24, and noticed that the airplane was upside down. The clerk said he hadn't noticed, because he didn't really know what an airplane looked like, but he'd taken them back and give Robey another sheet if he wanted.

"Ordinarily, the plate numbers were trimmed off at the top on these first printing sheets, but in this case, because it was an invert, the plate number appeared at the bottom and was saved," said Trepel.

Sixteen years ago, it sold for $1.1 million, a record then, and Trepel had estimated its price this time at $2½ to $3½ million. It very nearly split the difference, at $2.7 million plus a 10 percent buyer's commission.

Trepel was the auctioneer in 1989, and would only say that the buyer then was a "Southern broadcasting executive" but it's not Ted Turner.

"I'm going to respect his desire for anonymity. I think he got his thrill owning the plate block and wouldn't get much of a thrill at having the world know his name," said Trepel. (But we had to ask.)

Siegel Auctions has beat the publicity mill for this sale, including displaying the plate block on display at a local jewel in East Hampton, the toney enclave for the very-rich at the end of New York's Long Island.

"It was fun to see the people bringing their kids in and looking at it. Ten-year-old kids were awestruck by it," Trepel told de Vries.

"I think everybody knows about this stamp."

And if they don't, they will now that it set a record for the sale of a U.S. postage stamp.

"We've had more interest in this particular piece, both from spectators and potential buyers than we've had in probably anything else I've ever offered," said Trepel before the auction.

Although the airplane appears upside down, it's actually the red border that was printed incorrectly when the paper was fed into the press for the second color incorrectly. Eight such inverted sheets were found; only one made its way to the public.

Collectors have tracked each of the 100 stamps in that sheet, and nearly all of them still exist. Several years ago, one was sucked into a vacuum cleaner in suburban Detroit when it fell out of the owner's album.

"But it was retrieved," said Trepel. "He sold it off and upgraded it."

Another was encased made into a locket for his mistress by eccentric collector Col. Edward Green, who purchased the entire sheet from Robey in 1918 and broke it up.

"Mabel was a colorful character. I think we'd call her an 'exotic dancer' now," said Trepel. Green had a relationship with Mabel, despite his mother's objections, and married her after his mother died and left him $100 million.

Enough to buy some Jenny Inverts, even today.