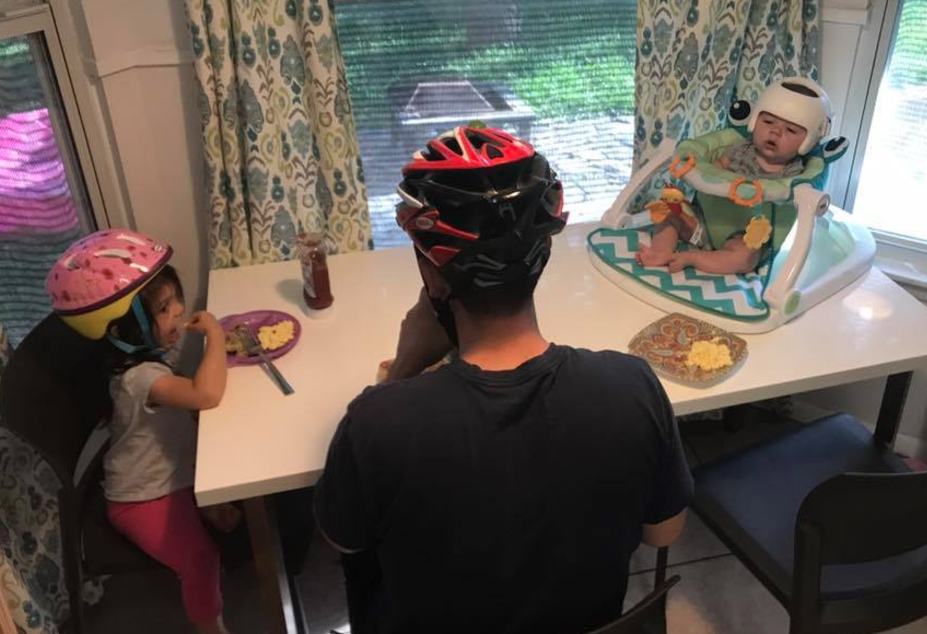 When Shayna Gutierrez was told her 4-month-old son had plagiocephaly -- also known as flat head syndrome -- she wasn't sure how people would respond.

As soon as Gutierrez returned from the doctor's office with the helmet last week, her 3-year-old daughter, Camilla, ran up to her and pointed and asked, "What's that?"

The mother from San Antonio, Texas, started to explain that her little brother, Jonas, had developed a flat spot on the back of his head and the helmet would help reshape it. He would need to wear the helmet 23 hours a day for up to six months.

Camilla hurried to her room, dug through her closet and returned to her mom with a pink and yellow bicycle helmet in hand.

"Where's yours?" asked Camilla, while fastening the strap around her chin.

Gutierrez smiled and grabbed a helmet. Her husband, Gary, also put his on -- and it's become a family routine ever since.

Every day, Camilla wakes up and straps on her helmet.

"I'm not surprised at all," Gutierrez told CBS News. "I think it's cute. It made me stop and realize what a great quality it is to see something different and say, 'Hey, I'll go along with you.'"

A photo of the Gutierrez family wearing helmets in solidarity with Jonas went viral over the weekend with more than 27,000 retweets.

Gutierrez was surprised by the overwhelming response. She's received dozens of messages from other families who have been impacted by plagiocephaly.

"We're really grateful that people have been moved by this," she added. "We're just an average family trying to do our best."

By some accounts, plagiocephaly has been on the rise in recent years, perhaps because of growing awareness among parents and doctors. It occurs when an infant's soft, developing skull becomes misshapen due to the birthing process or from sleeping in the same position. Experts say the condition is not harmful and can be corrected by varying the baby's position, doing gentle exercises or wearing a corrective helmet.

Thanks to Camilla, more people have been asking about plagiocephaly and she's showing people that it's OK to be different.

"She's been showing people acceptance and compassion," Gutierrez said. "I like the idea of her exposing something to other kids that may be different."