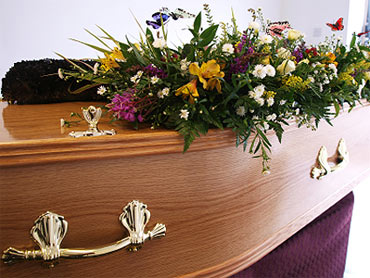 (CBS/AP) JOHNSTOWN, Pa. - A western Pennsylvania family is suing a hospital and funeral home after the wrong man's body was prepared for a viewing that had to be canceled after the family discovered the error.

The Tribune-Democrat of Johnstown reported Sunday that Richard Tkacik died at the hospital Nov. 23. Two days later, another man's body was at the viewing.

The lawsuit says the mistake was only confirmed when officials at Harris Funeral Home checked the body for a tattoo that Tkacik should have had. His body was eventually located at the hospital.

Funeral home owner William Harris declined to discuss how the mistake happened but said the body was not wrongly buried or cremated and the family incurred no related expenses.

The family is suing for more than $50,000 for emotional distress, depression and humiliation, the Tribune-Democrat reported.

Joe Marsaglia, a dean at the Pennsylvania Institute of Mortuary Science, told the Tribune-Democrat that such incidents are rare.

But when they do happen, "it can be very traumatic for a family walking into a visitation room and saying, 'Who's that?'"