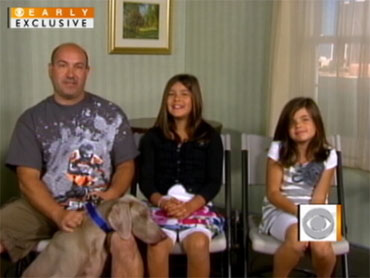 Seven years ago the Davis family of Lake Orion, Mich., had a Weimaraner dog named Jake. He was just a puppy and suddenly he was gone, stolen from their backyard. Yesterday Jake finally was reunited with the Davises after he was located hundreds of miles away in a Kentucky animal shelter.

Brad Davis and his daughters Izabella and Lola appeared on "The Early Show" Thursday with Jake -- and their incredible story.

Brad recalled, "The day after Thanksgiving, my wife went out to have Christmas pictures taken for the girls, (and) came back 45 minutes later and he was gone."

Brad said the loss was especially hard on Izabella.

"She was 3 at the time and Lola was only 1. She doesn't remember much about the day but Bella remembers it plain as day," he said. "We put a good reward out for him and didn't see nothing, so."

But when Brad got the call that his dog was found, he said the family was "really surprised."

He told "Early Show" co-anchor Harry Smith, "We had just left Kentucky. We were down there for a bicycle race, a BMX race for my son in Louisville. We had just gotten home. The next day they called us and said they found our dog. We were, 'No, our dog's with us, because we had a new dog about three months ago. So, I gave her a call back and then she said she had a dog that was microchipped. Right then, I knew it was Jake from seven years ago."

Izabella told Smith, "I was so happy."

Brad continued, "As soon as they told me he was there, he was in good health, I was on my way the next morning. It took us about seven hours down there, seven hours back. We got back last night about 9:30. We've been rolling ever since. It's been going great."

She said she thinks the dog still knows her.

Brad added for her, "He was all over you, loving on you."

He said, "You know, we pulled in last night and I rolled the window down and he went nuts in the back of the truck. He just wanted out so bad. Smelled around the house, smelled around the outside. And then jumped up in our bed, of course, last night."

Brad added the dog was "most definitely" well taken care of during the past seven years.

"Someone was looking over him and they did a good job for him," Brad said. "He's good now. We got him back home and we're happy to have him home, for sure."

Brad said Jake is already making friends with the family's other dog.