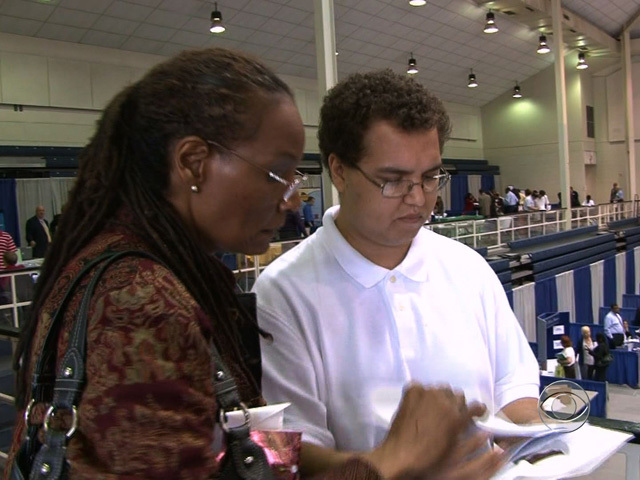 2011 did see some improvement in the job market. At the beginning of this year, nearly 13.9 million Americans were unemployed when 2011 began. The latest figures from November shows that figure is down to 13.3 million.

But that's no comfort to those who can't find work, especially in homes with more than one person without a job. CBS News correspondent Mark Strassmann in Atlanta shows one family's struggle.

Gloria Hall was at a job fair outside Atlanta looking for two openings: One for herself, the other for Colby Johnson, her 19 year-old-grandson.

Hall is a 62-year-old social worker who used to earn $22,000 a year. She lost her job last July when the hospital she worked in closed.

"What is it you like about working?" Strassmann asked her.

"To make a difference in people's lives. And so I like that," Hall answered. She later added: "For me, work is more than a paycheck."

"But these days, paycheck matters."

Her son, Kevin Hall, moved in with her. His construction job is their only income, and without it, she'd lose her house. And because her grandson has no job, he lives with them, too.

"Do you see that turning around?" Strassmann asked him.

But for both of them, this jobs fair was a bust.

"I went to each and every one of those tables..nothing."

Hall looks for new leads every day, and encourages her grandson to do the same. But the bill collectors keep calling and she hinted to us there are days when she feels life is not worth living.

"How do you hold it together in those moments when its hardest?" asked Strassmann.

"I have to think about my kids and grandkids," said Hall. "I really do. I have to find something to focus on or else it gets to the point where you go like,''Why bother?'"

"You gotta put one foot in front of the other," commented Strassman.

"Whether you want to or not," said Hall. "You have to. You don't have a choice."

So that's what she has been doing, on this day driving her grandson to a job interview at a call center. He thought it went well, but the company hired someone else.

This family needs two jobs, and they can't even find one.