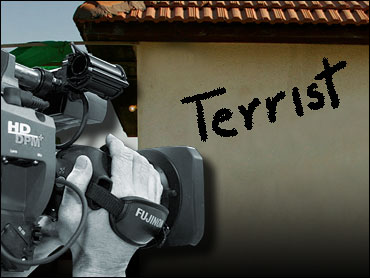 A couple whose home was wrongly identified on national television as belonging to an Islamic radical has faced harassment, and police are providing special protection.

After the report ran on Fox News on Aug. 7, people have shouted profanities at Randy and Ronnell Vorick and spray-painted "terrorist" (spelling it "terrist") on their property.

"I'm scared to go to work and leave my kids home. I call them every 30 minutes to make sure they're OK," Randy Vorick said.

John Loftus, a former federal prosecutor who appears on the Fox News segment "Inside Scoop with John Loftus," gave out the house address during the broadcast.

He said the home belonged to Iyad Hilal, whose group, Loftus said, has ties to those responsible for the July 7 bombings in London. But Hilal moved out of the house about three years ago.

Police have patrolled their house since the day after the broadcast and now have a squad car across the street. Police Capt. John Rees said the department was "giving special attention to the family to make sure they're safe."

The couple sought a public apology and correction.

"John Loftus has been reprimanded for his careless error, and we sincerely apologize to the family," said Fox spokeswoman Irena Brigante.

Loftus also apologized and told the Los Angeles Times last week that "mistakes happen. ... That was the best information we had at the time."

The FBI has launched an inquiry into the activities of Hilal, a grocery store owner who is allegedly the U.S. leader of Hizb ut-Tahrir, which has been banned in parts of Europe and the Middle East.

Hilal, 56, is apparently not suspected of any terrorist acts, but FBI terrorism investigators want to know more about his and the group's activities.