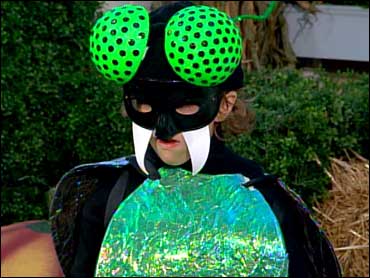 There are only a few more days until Halloween. If you and your child haven't yet decided what they should wear, The Early Show offered some suggestions that you can still pull off in time.

Lee Woodruff, a contributing editor at Family Fun magazine, showed some of this year's most creative and popular costumes that you can make yourself or buy at a store.

Costumes made at home
"The point of all of these costumes is that they're pretty simple costumes to make," Woodruff said. "You may have a lot of the stuff needed lying around, which is always the focus for 'Family Fun' projects — the idea that you don't have to go out and spend a lot of money because you can usually use things you have in the house already."

Here are the costumes featured. Click on the links bellow to get craft instructions:

Bug family: A little girl ladybug, a little boy bug and a parent bug catcher. "The wings are made with cardboard," Woodruff said. "Make what you want of this costume."

Washing machine: "The main thing you need is just a cardboard box," Woodruff said. "Just cut out the holes in the box and the front is the opening. Then you just put some clothes on the head."

Flower fairy: "You can also customize this just for your fairy by creating the flower in her favorite color," Woodruff said. "It's also so easy to do. A lot of girls have a tutu around the house. You can really go all out, too, by adding silver shoes and a little wand."

Chicken: "This is for a mom who likes to sew," Woodruff said. Online instructions are for chicken-in-a-box.

Puns: Girl smarty pants, boy quarterback, and girl black eyed peas. "The puns are really great, especially for the older kids who are too cool to go nuts on something and really dress up," Woodruff said.

Store-bought costumes
As for the store-bought costumes, Woodruff said, "What would Halloween be without Batman and Spider-Man? Also, Star Wars has had a huge resurgence since the prequel movies have come out. Here are her suggestions: