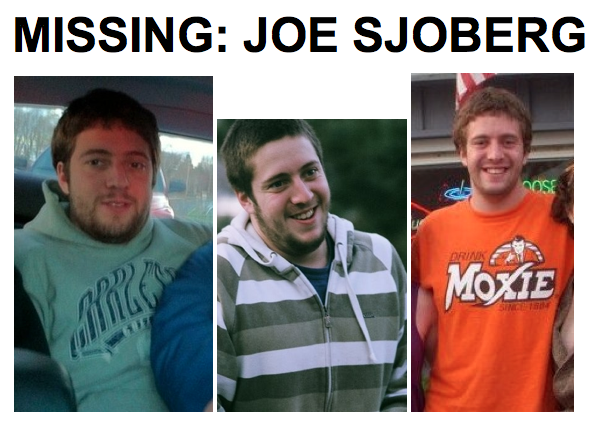 On Thursday, Dec. 2, 2010, instead of waiting for leads from authorities, Sjoberg's family took matters into its own hands, launching a social media "amber alert." I spoke to Joe Sjoberg's brother Robert in the video below about the disappearance and how his family has been using the online community to get tips from people and to mobilize volunteers in the search.

They created a Facebook group (which now has grown to more than 11,000 supporters); a site, find.joeismissing.com, where frequent updates are released and a video on Youtube; and a request for help was posted on AskReddit

On Dec. 4, 2010, Sjoberg's family learned that he had researched private air strips in Wisconsin. Within 90 minutes of posting a request for help on the "Joe Sjoberg Missing" Facebook page, volunteers had contacted the nearly 600 private airstrips in Wisconsin and faxed or e-mailed flyers with information.

In a different instance, volunteers contacted 200 Wisconsin-area hotels and more than 200 local hospitals at the family's request. Volunteers have also e-mailed or faxed hundreds of flyers to gas stations and local businesses. Those on the ground in the midwest have searched miles of airport parking lots in Milwaukee, Madison, Wis., and Chicago looking for Joe's car.

The story has caught the attention of celebs such as Jimmy Fallon, Craig Ferguson and ESPN commentator Matthew Berry, who have posted the news on their twitter feeds.

Robert Sjoberg told me that without social media this process would have taken police weeks to complete. "I've always just enjoyed it in keeping in touch with people, but when you have 1,000 friends coming out of the woodwork because everyone cares about you and Joe...the way that it can move so quickly and how we can get so much accomplished with social networks is just incredible," he said.