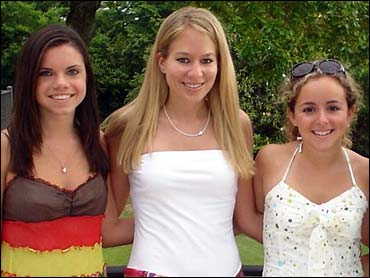 Natalee Holloway's family is demanding Aruban authorities share their findings with them.

The 18-year-old Alabama teen disappeared May 30 while on a school graduation trip to the Caribbean island.

"I want to see the police record from May 30th," said the teen's mother, Beth Holloway Twitty. Holloway insists the three young men hold the key to the investigation and that authorities should press them harder to tell the truth.

Meanwhile, a judge ordered a party boat disc jockey held until at least next Tuesday in the disappearance of an Alabama teenager in Aruba.

Steve Gregory Croes, 26, is one of four men detained in the four-week-old case. None has been charged, frustrating Holloway's family.

On Monday relatives also said a Texas company would help search for her.

Holloway, of Mountain Brook, Ala., disappeared on the last day of a five-day vacation with 124 students celebrating their high school graduation. Her passport and packed bags were found in her room.

Prosecutors did not say what role they suspect Croes of playing in Holloway's disappearance, reports CBS News Correspondent Kelly Cobiella. His distraught ex-wife, who was outside the courthouse, left without a word. But Croes is not being held for murder and kidnapping as the other three suspects are.

Croes, who was arrested Friday, said he knew one of two Surinamese brothers detained in the case because they went to the same Internet cafe, according to Marcus Wiggins, Croes' employer on the party boat Tattoo. It was not known what other ties he may have had to either the brothers or a third young man in detention, 17-year-old Joran van der Sloot, the son of a justice official in Aruba. The boat Tattoo docks near the Holiday Inn where Holloway was staying.

The same judge has also ruled that van der Sloot's father still can't visit the youth in jail, reports CBS News Correspondent Peter King. No reason was given, but police interviewed the father over the weekend as a witness, and they may believe a jail visit could compromise their investigation.

On Saturday, a judge ordered the three to remain in jail at least another week.

"They are going to help us search for Natalee in ways we couldn't before," Reynolds said.

Texas EquuSearch, made up of volunteers, said on its Web site that a team is traveling to Aruba this week.

The company plans to bring sonar units for boats and search dogs to Aruba, reports Cobiella, hoping to find what so far an entire island has missed.

Investigators refuse to say whether they believe Holloway is dead. Her mother has said she will continue to believe the teen is alive until she has proof to the contrary.