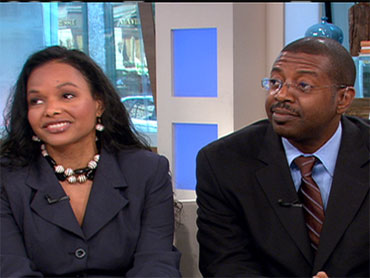 There's a grassroots movement growing in America -- African Americans patronizing only black businesses to force a change in the local economy.

On "The Early Show" Tuesday, one family shared their story of buying black.

Chicagoans Maggie and John Anderson have dedicated themselves to living off of only black-owned businesses in an effort called The Empowerment Experiment.

Maggie, a lawyer, and her husband John, a financial advisor, and their two young daughters, have spent more than $45,000 in their effort so far.

"People who have cancer in their family, they do their best to work towards curing cancer," she said. "And for me, the problems going on in the black community, that our kids are choosing gangs over college, that our kids don't think that it's possible to be a business owner in America, even though we have a black president...This is my cancer."

So, in her fight, Maggie drives four miles from her home to invest her family's money with a black-owned bank, and her husband John patronizes a black-owned dry cleaner. Maggie also drives 16 miles to give her money to the only black-owned grocery store in Chicago.

"Sixteen miles for bananas may sound crazy to some folks," Maggie said, "but to me it means empowering this community."

And she's trying to empower other communities, too, traveling thousands of miles and signing up more than 8,000 members for The Empowerment Experiment.

But, buying black does have its critics.

John said, "We've heard criticisms -- like this is exclusive -- even racist."

To that, Maggie responds, "Why is that racism, for black people to say, 'These are our problems -- we need to fix them." '

Maggie told "Early Show co-anchor Harry Smith, "Every day, increasingly it becomes a more powerful, a more -- it's a wonderful experience for us. Some people think about the driving 16 miles and all the sacrifices we make in terms of driving as a sacrifice. Our life is not a life of sacrifice -- our life is empowering."

John added, "Business owners have obviously found us to be extremely positive in that they know that if we're supporting them, we're helping create role models and, you know, propagate more businesses and growth that obviously is going to help...keep wealth in the black community."

Asked about reverse racism, John said the project is an "academic exercise" that is trying to bear out from a statistical standpoint what would happen if more money were reinvested in underserved black communities, and how this could help bridge the social gaps.

Maggie admitted the project is "controversial," but a "laudable goal."

However, Elder, who appeared from Los Angeles, said, though he supports black entrepreneurship, he believes businesses succeed and fail on other factors, such as quality, service, value and convenience.

Elder, a small businessman for 15 years, said he had a "mainstream clientele" that came back if the service was good. However, he said basing business on other factors, such as race, shouldn't come into play.

Maggie responded that the effort isn't to give anyone license to offer poor goods and services.

"We are uplifting quality black businesses. But at the same time, we are encouraging those folks who are looking for ways to empower our community to do so by reinvesting our dollars -- now approaching $1 trillion in buying power -- into those communities that need it the most."

She said, "The black community is disproportionately impacted by every measure of social and economic progress in this nation, and nothing is going to change...if we stay business as usual."