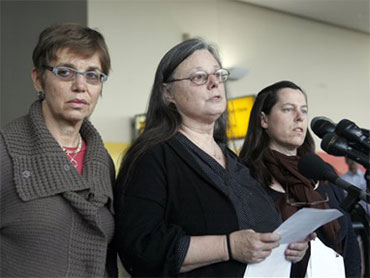 The mothers of three Americans jailed in Iran for nearly a year are demanding the immediate release or trial of their children, saying the Iranian government is using them as pawns in a standoff with the U.S.

A joint statement released Thursday was the first time the families of the jailed Americans have publicly criticized the Iranian government. Until now, the families have said they didn't want to politicize the case. But in their statement, the mothers called their children's plight "a cynical attempt by Iran to exert leverage with the United States."

"These kids are innocent and Iran knows it," Laura Fattal, mother of captive Josh Fattal, told The Associated Press. The mothers say Iranian officials are flouting their country's humanitarian and legal obligations by holding the three Americans without a trial.

Josh Fattal, 28, Sarah Shourd, 31, and Shane Bauer, 27, were arrested along the Iran-Iraq border, and Iranian officials have accused them of espionage. Their families say the three were hiking in Iraq's northern Kurdistan and that any border crossing was unintentional.

All three women traveled to Iran last month and were allowed two visits with their children, but Nora Shourd said nothing has come of that.

"We're no longer asking, we're demanding," said Shourd, of Oakland, Calif. "They got their compassionate little propaganda piece out of our visit, and we got nothing out of it. Whatever we have to do at this point to publicly embarrass and put them in a corner, we'll do."

The mothers said there's been no new information about their children since the visit in mid-May. They say their Iranian attorney still has not been allowed to meet with his clients. And Swiss diplomats, who represent U.S. interests in Tehran and have been granted three visits with the Americans, have not been let in to see them since April.

Mohammad Javad Larijani, the secretary-general of Iran's High Council for Human Rights, said in Geneva last week that a trial "should not be very far from now." He said authorities were in the final stages of collecting information and carrying out interrogations.

But Laura Fattal, of suburban Philadelphia, said that during the mothers' visit, their kids told them they had not been questioned since February.

The three hikers are graduates of the University of California at Berkeley. Bauer, a freelance journalist, had been hired to cover the Kurdish elections in Iraq, but his family said the hiking trip was a vacation. He and Sarah Shourd were dating and had been living in Damascus, Syria. She taught English and had written for various online publications. Josh Fattal went to visit them after traveling overseas on a teaching fellowship.

Nora Shourd said she was growing more worried about her daughter's mental and physical health. Sarah Shourd is in solitary confinement, allowed only two short visits per day with Bauer and Fattal, and has reportedly been suffering from depression and a gynecological condition.

"We want them released or put on trial. Go ahead and put your money where your mouth is," Nora Shourd said. "Stop talking about it. Just do it."