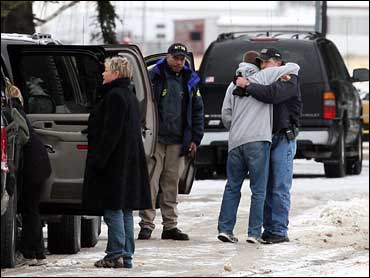 Dr. Irving "Bud" Feldkamp was at the entrance of the ultra-exclusive resort where he planned to spend the week skiing with his children and grandchildren when he got the call from his nephew.

"He saw it on CNN. He said, 'Nobody survived.' And we knew it was our plane," Feldkamp said Monday.

Two of his daughters, two sons-in-law and five of his grandchildren were among 14 people killed Sunday when their single-engine turboprop plane nose-dived into a Catholic cemetery near the Butte airport and burst into flames.

Speculation over the crash shifted to ice on the wings Monday after it became less likely that overloading was to blame. The plane was designed to carry just 10 people but seven of those on board were children under 10.

CBS News correspondent Hattie Kauffman reports that families of the victims wanted to see the crash site, and NTSB gave them a tour in private.

Feldkamp spoke after visiting the snowy crash scene with his wife, their two surviving children and other family members. For about 45 minutes, they stood near the twisted and charred debris, talking with investigators as a light snow fell. Scattered across the site were tarps covering the remains of the victims.

Also on the scene was Bob Ching, who was to have hosted the Feldkamps this week at his house at the Yellowstone Club. Ching's son, his son's wife and their two children also were killed in the crash.

Kauffman said the cemetery next door to the Butte airport has become a makeshift memorial to the 14 people who died in the crash.

Feldkamp, a dentist and president of Glen Helen Raceway in Southern California, had planned for a weeklong vacation with his extended family at the club, a millionaires-only resort south of Bozeman, Mont.

He drove out from California with his wife and another daughter, and they had planned to get together with the rest of the family Sunday night.

"We were going on a vacation with all the grandkids," Feldkamp said. "They were all excited about skiing."

The pilot was identified as Buddy Summerfield, 65, of Redlands, Calif. Summerfield was a former military flier who had logged 2,000 hours flying the type of plane that crashed.

The National Transportation Safety Board said the remains were being removed from the crash site Monday by the Butte-Silverbow coroner.

While descending Sunday in preparation for landing at the Bert Mooney Airport in Butte, Mont., the plane passed through a layer of air at about 1,500 feet that was conducive to icing because the temperatures were below freezing and the air "had 100 percent relative humidity or was saturated," according to AccuWeather.com, a forecasting service in State College, Pa.

Safety experts said similar icing conditions existed when a Continental Airlines twin-engine turboprop crashed into a home near Buffalo Niagara International Airport last month, killing 50. A possible stall created by ice, and the pilot's reaction to it, has been the focus of the Buffalo investigation.

"It's Buffalo all over again, or it could be," said John Goglia, a former member of the National Transportation Safety Board. "Icing, given those conditions, is certainly going to be high on the list of things to look at for the investigators."

Mark Rosenker, acting NTSB chairman, told reporters in Montana that investigators would look at icing on the wings as a factor.

"We will be looking at everything as it relates to the weather," he said.

Safety experts said finding the cause of the crash is likely to be significantly complicated by the absence of either a cockpit voice recorder or a flight data recorder, which isn't required for smaller aircraft that don't fly commercial passengers.

Former NTSB chairman Jim Hall pointed to similarities between the Montana crash and a March 26, 2005 crash near Bellefonte, Pa., in which a pilot and five passengers were killed.

The plane in both cases was a Pilatus PC 12/45 and was on approach to an airport. In both cases there were reports of conditions conducive to icing at lower elevations and witness reports that the plane appeared to dive into the ground.

"I'm certain they are also going to look at the weather conditions at the time and the pilot's training," Hall said. He pointed to a recommendation on NTSB's "most wanted list" of safety improvements that FAA test the ability of turboprop planes to withstand a particular type of icing condition called "super cooled liquid drops" before certifying the aircraft design for flight. FAA officials have said they're working on that recommendation.

Hours after the crash, federal investigators had focused on overloading as a possible cause. But Goglia said the Pilatus has a powerful engine for its size and is unlikely to be affected by the additional weight of a few children "unless they had an awful lot of baggage."

Standard flight procedures are for the pilot to file a report on the plane's weight before taking off, safety experts said.

Peter Felsch, a meteorologist at the National Weather Service, said conditions measured on the ground not long after the 2:30 p.m. MDT crash were fair - winds of about 9 mph, 10 miles visibility, a temperature of 44 degrees Fahrenheit and a "broken cloud deck at 6,500 feet."

The Pilatus PC 12/45 is certified for flight into known icing conditions, according to the manufacturers' Web site and pilots who have flown the plane.

However, like all turboprop planes, it relies on deicing boots - strips of rubber-like material on the leading edge of the wings and the horizontal part of the tail - that inflate and contract to break up ice. That technology, which goes back decades, isn't as effective at eliminating ice as the heat that jetliners divert from their engines to their wings.

One key in the Butte crash will be whether the pilot had changed the position of the aircraft's wing flaps for landing because changing the configuration of the wings by moving the flaps is where icing problems often show up, said Peter Goelz, a former NTSB managing director.

There won't be any radar data of the plane's final moments for investigators to examine - like thousands of small airports, the Butte airport doesn't have a radar facility.

The last radio communication from the turboprop's pilot was with the Salt Lake City center when the plane was about 12 miles from Butte, said Doug Church, a spokesman for the National Air Traffic Controllers Association. The pilot told controllers he intended to land at Butte using visual landing procedures rather than relying on instruments, which is not unusual, Church said.

Rosenker confirmed that the pilot said nothing to controllers to indicate he was having trouble, including during radio conversations earlier in the flight when the pilot notified controllers he intended to divert from the flight's original destination of Bozeman, Mont., to Butte.

John Cox, an aviation safety consultant and former crash investigator for the Air Line Pilots Association, said the lack of data means investigators will have to go "back to the old, traditional way of investigating aircraft accidents, looking at impact angles, looking at damage done to the aircraft, whether the engine was producing power or not."

"Then they'll have to look for anything unusual - bird feathers, a piece missing off the engine - it will be a series of exclusions," Cox said. "It will be sketchy, and it will not be nearly as definitive as it would be if they had had one of the recorders."

The particular plane that crashed Sunday was registered to Eagle Cap Leasing Inc. in Enterprise, Ore.; Bud Feldkamp is president of the company.

Feldkamp's family has gone through tragedy before. Two years ago, his 10-month-old grandson, Chase, died after he was found to have slipped between a mattress and the edge of a bed during a nap. The child was taken to a hospital and was eventually taken off life support.

The child's father, Buddy Feldkamp, and his wife and children had planned to skip this winter's ski trip. They drove to Butte from Oregon on Sunday night after hearing news of the crash.