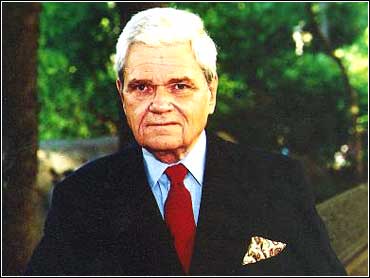 Best-selling author Peter Maas, who over 50 years chronicled the Mafia, died Thursday at the age of 72.

Maas, who detailed the life of an incorruptible New York City policeman named Frank Serpico in a book that became an Al Pacino movie, died at Mount Sinai Hospital of an undisclosed cause, said Lucille Lee, a hospital spokeswoman.

Maas wrote more than a dozen novels and nonfiction books, along with an assortment of investigative magazine pieces. His resume included work at New York magazine, the Saturday Evening Post, Look and Collier's.

He considered himself part of the "new journalism" with fellow writers Jimmy Breslin and Tom Wolfe, bringing the flourishes of fiction writing to news stories during the early 1960s.

In 1969, Maas wrote "The Valachi Papers" -- his account of mob soldier Valachi's brutal career and decision to become a federal informant. Valachi's 1963 testimony before a congressional panel had thrust the mob into the national spotlight.

It became an international best seller and hit movie.

In between, Maas wrote "Serpico," the story of Serpico and his battle against departmental corruption. Maas gave half of his $400,000 screen rights to Serpico.

A native New Yorker, Maas began his writing career while a student at Duke University, scoring an exclusive interview with labor leader Walter Reuther -- a scoop that he sold to The Associated Press for $100, Maas recalled in an interview last year.

He moved on to the New York Herald Tribune in Paris before joining Collier's in 1955. While at Look magazine, he drew national attention for his story of a Louisiana black man who had been on death row longer than any other prisoner in the United States.

An inadvertent luncheon tip from then-Attorney General Robert Kennedy about a Mafia informant put Maas on the Valachi story. He wrote a series of three articles for the Saturday Evening Post, and followed with a book.

It took a court fight to win the right to publish the story after the government balked at its publication, claiming it would be "detrimental to law enforcement."

Maas' string of nonfiction books continued with "The King of Gypsies." He scored with 1979's "Made in America," his first foray into fiction. Another Maas book, "Marie: A True Story," became a movie with Sissy Spacek.

"The Terrible Hours," his account of the first successful submarine rescue, was a Times best seller last year.

Maas is survived by his third wife, Suzanne Maas, and two sons.