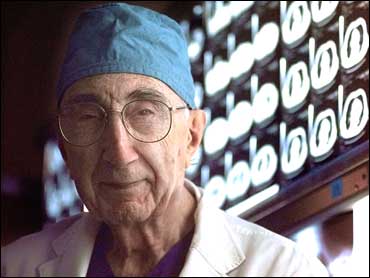 Dr. Michael DeBakey, the world-famous cardiovascular surgeon who pioneered such now-common procedures as bypass surgery and invented a host of devices to help heart patients, died Friday night at The Methodist Hospital in Houston, officials announced. He was 99.

DeBakey died from "natural causes," according to a written statement issued early Saturday by spokesmen for Baylor College of Medicine and The Methodist Hospital.

DeBakey underwent surgery in February 2006 for a damaged aorta - a procedure he had developed.

DeBakey counted world leaders among his patients and helped turn Baylor College of Medicine in Houston from a provincial school into one of the nation's great medical institutions.

"Dr. DeBakey's reputation brought many people into this institution, and he treated them all: heads of state, entertainers, businessmen and presidents, as well as people with no titles and no means," said Ron Girotto, president of The Methodist Hospital System.

Girotto said the surgeon "has improved the human condition and touched the lives of generations to come."

The first time he saw a human heart beating, Debakey thought it was beautiful - a work of art, reports CBS News correspondent Tony Guida. He would spend the rest of his life fixing the flaws in these human canvases.

View a slideshow of Dr. DeBakey, courtesy of KHOU.com

While still in medical school in 1932, he invented the roller pump, which became the major component of the heart-lung machine, beginning the era of open-heart surgery. The machine takes over the function of the heart and lungs during surgery.

It was only a start of a lifetime of innovation. The surgical procedures that DeBakey developed once were the wonders of the medical world. Today, they are commonplace procedures in most hospitals.

He also was a pioneer in the effort to develop artificial hearts and heart pumps to assist patients waiting for transplants, and helped create more than 70 surgical instruments.

In a rare interview published in December 2006, DeBakey gave The New York Times details of the operation on his damaged aorta earlier that year, when he was 97.

"It is a miracle," DeBakey said. "I really should not be here." He said he at first gambled that his aorta would heal on its own and refused to be admitted to a hospital, and was unresponsive and near death when his doctors and his wife decided to proceed, despite his age. He then spent several months in the hospital.

As he recovered, DeBakey told his doctors he was glad they had operated, despite his earlier refusals.

Dr. William T. Butler, a colleague of DeBakey's at Baylor, said in March 2006 that DeBakey established himself with his surgical firsts as the "maestro of cardiovascular surgery."

"Dr. DeBakey was never afraid to challenge the status quo, often going against the tide," Butler said. "Some times his colleagues did not really accept his visionary ideas, particularly as he propelled beyond the boundaries of existing scientific dogma."

In a 1985 Associated Press interview, DeBakey said, "I'm accused of being a perfectionist and, in the way it's usually defined, I guess I am. In medicine, and certainly in surgery, you have to be as perfect as possible. There's no room for mistakes." 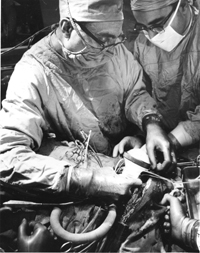 DeBakey was the first to perform replacement of arterial aneurysms and obstructive lesions in the mid-1950s. He later developed bypass pumps and connections to replace excised segments of diseased arteries.

A tireless worker and a stern taskmaster, DeBakey literally had scores of patients under his care at any one time, helping to establish his name as a leading cardiovascular surgeon. By 1992, he had performed more than 50,000 surgeries.

"Man was born to work hard," he said.

His patients ranged from penniless peasants from the Third World to such famous figures as the Duke of Windsor, the Shah of Iran, King Hussein of Jordan, Turkish President Turgut Ozal, Nicaraguan Leader Violetta Chamorro and Presidents Kennedy, Johnson and Nixon.

But he said celebrities don't get special treatment on the operating table: "Once you incise the skin, you find that they are all very similar."

He made headlines again in 1996 when he flew to Moscow to help examine ailing Russian President Boris Yeltsin and served as a consultant when he underwent surgery.

DeBakey served as chairman of the President's Commission on Heart Disease, Cancer and Stroke during Johnson's administration and helped establish the National Library of Medicine. He was author of more than 1,000 medical reports, papers, chapters and books on surgery, medicine and related topics.

DeBakey also trained hundreds of cardiovascular surgeons who now are practicing throughout the world. Among them was famed heart surgeon Dr. Denton Cooley, who later became DeBakey's chief rival in the Texas Medical Center.

"I like my work, very much. I like it so much that I don't want to do anything else," DeBakey said.

Baylor University College of Medicine was a fledgling medical school when DeBakey joined it in 1948, five years after it moved from Dallas to Houston.

The Waco-based university later cut its ties to the school, but DeBakey, as the medical school's president and later chancellor, had helped to establish its own identity.

In 1953, DeBakey performed the first Dacron graft to replace part of an occluded artery. In the 1960s, he began coronary arterial bypasses.

In 1962, DeBakey received a $2.5 million grant to work on an artificial heart that could be implanted without being linked to an exterior console. In 1966, he was the first to successfully use a partial artificial heart - a left ventricular bypass pump.

It was the first implantation of a complete artificial heart by Cooley in 1969 that led to the famous feud between the two surgeons that lasted until the two publicly made amends in 2007. The patient, Haskell Karp, 47, lived on the artificial heart for nearly five days, then received a heart transplant, but died 36 hours later.

Cooley was censured by the medical school and the National Heart Institute for using the experimental device, and he and DeBakey traded accusations about their research. Cooley, who contended Karp was so ill he had no choice but to operate, left Baylor and established the Texas Heart Institute at St. Luke's Episcopal Hospital in the Texas Medical Center.

Meanwhile, the effort to save lives through heart transplants was stalled. Dr. Christiaan Bernard in South Africa had performed the first human heart transplant in history in late 1967. In the United States, DeBakey and Cooley were among those who began performing the transplants, but death rates were high because the recipients' bodies rejected the new organs.

The advent of a new anti-rejection drug, cyclosporine, gave new impetus to organ transplants in the 1980s. In 1984, DeBakey performed his first heart transplant in 14 years.

His work as an inventor continued. In the late 1990s, DeBakey brought out a ventricular assist device touted as one-tenth the size of current heart pumps that helped ease suffering for patients waiting for heart transplants.

In the late 1990s, he took an active role in creating the Michael E. DeBakey Heart Institute at Hays Medical Center in Hays, Kan.

DeBakey was born Sept. 7, 1908, in Lake Charles, La., the son of Lebanese immigrants. He got interested in medicine while listening to physicians chat at his father's pharmacy.

"I always knew I wanted to be a doctor. I just didn't know what kind," DeBakey once said.

He received his bachelor's and medical degrees from Tulane University in New Orleans.

He recalled in 1999 that the time he finished medical school in 1932, "there was virtually nothing you could do for heart disease. If a patient came in with a heart attack, it was up to God."

Early in his career, DeBakey invented a new blood transfusion needle, a new suture scissors and a new colostomy clamp. He began teaching at Tulane in 1937.

He returned to Tulane after the war and joined Baylor University College of Medicine in Houston in 1948.