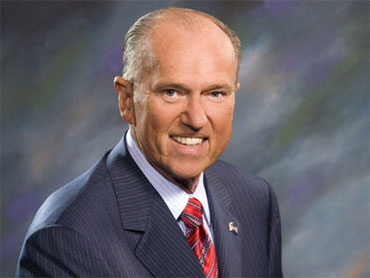 George Michael, a mainstay on the Washington, D.C., sports television scene for decades who reached a national audience with "The George Michael Sports Machine" highlights show, has died. He was 70 years old.

"He waged his battle against cancer with the same drive and determination that made him a one-of-a-kind in the broadcasting industry," the family said in a statement. "Whether it was covering a sports story, working on his horse farm, or spending time with family and friends, he approached everything in life with passion."

"Sports Machine" began shortly after Michael's arrival at WRC TV in Washington in 1980 as "George Michael's Sports Final," a late-night local feature. Then in 1984 it grew into the first nationally syndicated sports highlights show, eventually airing in 194 markets across the United States and in 10 foreign countries.

It was a trendsetting program, gaining its footing in the days before cable television and ESPN were widely available. The show was also the first to give regular national TV exposure to once obscure sports like NASCAR and professional rodeo.

In a statement, WRC called Michael a pioneer in sports broadcasting and a dynamic force in its newsroom.

"He was a gifted interviewer, a master storyteller, and one of the hardest working journalists out there," the station said.

"I doubt we'll ever again see a sports reporter who was so admired by the people he covered," Snyder said in statement.

Jeff Martinez, 40, of Sterling, Va., who worked on "Sports Machine" first as an intern and later as an associate producer from 1991 to 1995, said Michael was a perfectionist.

"You had to bring your A-game every day," Martinez said. Michael had no problem letting a staffer know "if you weren't performing what he thought your potential was."

Martinez also said Michael was supportive when he was diagnosed with Crohn's disease, which affects the digestive system, allowing him to take a leave of absence.

"He definitely took care of his own ... he was very very caring," he said. "Rather than pressuring me to come back to work sooner than I needed to, he was always there calling me and making sure I was doing well."

The show ran until March 2007. Michael said in late 2006 that significant layoffs and staff cuts announced at NBC, which owns WRC, prompted his decision to end the show.

"I told them, that if I have to lay anyone off, if I have to get rid of any of my staff, then I'm going to take the first bullet," Michael said.

Michael continued to appear on air for the next couple of years, hosting the station's weekly half-hour shows, "Redskins Report" and "Full Court Press."

Michael's family said plans for a memorial service are not yet complete. Besides his daughter, Michelle Allen, he is survived by his wife of 31 years, Patricia, and his son, Brad.