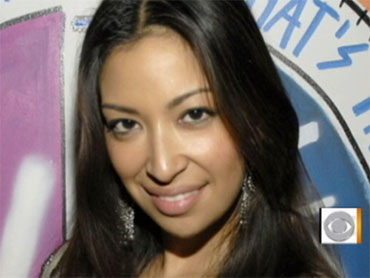 It's a story straight out of a Hollywood movie: A young fashion designer is found dead in an upscale New York hotel room and the son of an Academy Award-winning composer is now being questioned by police.

Fashion designer Sylvie Cachay, 33, was found dead in a bathtub in her room at Manhattan's exclusive Soho House on Thursday, reports CBS News National Correspondent Jeff Glor, who adds police are now turning to her former boyfriend for possible answers.

Police responded to a 911 call from The Soho House, a tony Manhattan hotel made trendy by the HBO series "Sex and the City."

There, in a bathtub overflowing with water, they found Cachy's partially-clothed body. She was a swimsuit designer whose work has been featured in Vogue, Glamour, and on runway shows around the country.

Red marks on her neck suggest she might have been strangled, police say. Several bottles of prescription pills that appeared to be full were also found in the room, authorities note.

Laura Levitan, of Atlanta, a guest a tthe hotel, says, "I don't think any of us would expect a place like Soho House to be the location of a murder."

Did Hospital Kill Teen For His Organs?

People who knew Cachay said she had recently broken up with her boyfriend, 27-year-old Nicholas Brooks, but she had checked into the hotel with him just a few days earlier. Brooks, who was not there when her body was discovered, was questioned by police but later released. He's the son of composer Joseph Brooks, a 1978 Academy Award- winner for the ballad "You Light Up My Life."

The elder Brooks also gained notoriety after he was indicted in 2009 for 82 counts of sex-related crimes.

Cachay's death has stunned loved ones. In a statement, her publicist said, "It was her magnetic energy, sincere kindness and emotional generosity with friends and family that she will be best remembered for. She will be deeply and painfully missed."

Glor reported other guests staying at the hotel reported hearing loud noises coming from Cachay's room during the night. The medical examiner has not yet released a cause of death.

On "The Early Show" Criminologist Casey Jordan told co-anchor Harry Smith police are probably already looking into Nicholas Brooks' credit card traffic, e-mail, texts to determine what might have been his electronic trail.

She added, "The good news for (the investigation) is that this hotel is going to have excellent security. We know they have a record from the cameras in the hotel of his coming and going. The record of the water leaking through the ceiling came through around 2:30 a.m. He returned about 3:30 a.m". So he wasn't in the hotel when she was discovered but they will look at everything, where was they the early morning hours of yesterday? And what is his alibi, when was the last time he saw her, what was her condition, they will ask him all of that."

Another aspect of the investigation, Jordan said, will involve the swipe keys used in the hotel.

She said, "And if there was anybody else in the room, they'll know that, too. So, it could just be a process of elimination. If he is the only person seen and the card swipe indicates he was the only other person in that room at the time that the death happened and again we don't know whether it's a homicide, an accident, a suicide, natural causes, but we should know that shortly."

Jordan replied, "Well, the pill bottle was closed. It is prescription medication, not illegal. It could be anything. Probably just regular medication. Going to get a toxicology report from that autopsy and find out, of course, whether there were drugs, alcohol involved in her death."

She continued, "To me, what is most interesting she was partially clothed, sweater, underwear on. Nobody take as bath in their clothes. The taps are on, the water overflowing, apparently. They will check the marks, I've heard there could be a bite mark on the hand. They will look for signs of a struggle, even though the room was clean and no big smashed furniture or anything. They will ask was she drowned, held under the water, strangled or unconscious from an overdose. All those questions will be pursued to find out the cause of death."

As for Brooks, Smith asked if investigators could collect a DNA sample from him during questioning.

"Cooperate, not cooperate, really they're going to get that information anyway," she said. "They will get his DNA, they will get his cell phone recordings and find out his coming and going from the hotel. And really the forensics is probably going to solve this crime, direct evidence."