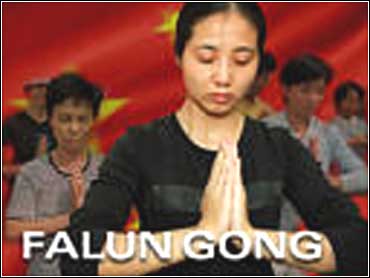 Fourteen followers of the banned Falun Gong sect died in a Chinese labor camp, a provincial official said Wednesday. The official and a Hong Kong-based rights group termed the deaths mass suicide, but the sect said the prisoners were tortured to death.

However, an official with China's central government claimed the provincial official was wrong and said only three people had died in the incident at the Wanjia in the northeastern Heilongjiang province. "That's the official answer," he said, speaking on condition of anonymity.

Lan Jingli, director of the regional judicial bureau in Heilongjiang, said the 14 inmates made ropes from sheets and hanged themselves from bunk beds during a gap between patrols by prison guards. Another 11 were rescued by camp guards as they tried to kill themselves, Lan said.

The conflicting accounts came after a Hong Kong-based rights group reported Tuesday that 16 Falun Gong practitioners had hanged themselves. The Information Center for Human Rights and Democracy said the officials had extended prisoners' sentences by three to six months because they had staged a hunger strike to protest abuse.

Falun Gong blamed camp authorities, saying in a statement Tuesday that at least 15 women followers were tortured to death on or around June 20. The sect said its followers could not have committed suicide because they were watched around the clock.

"There's no way they could be allowed to have the opportunity to even find anything to hang themselves," said Sharon Xu, a Falun Gong spokeswoman in Hong Kong.

Lan said guards watched the practitioners closely, patrolling every five minutes, but that the followers acted quickly when the guards were gone.

"One minute is enough to kill," Lan said. "While 11 of them were immediately rescued by the camp guards, 14 others died."

Lan's account would make it the deadliest mass suicide involving Falun Gong practitioners in the government's relentless two-year crackdown on the spiritual movement, which was banned in 1999.

But the central government official, responding to reporters' phoned questions, said 11 sect followers, all women, had attempted suicide, nd that eight of them survived. The survivors are now "out of danger," said the official for the cabinet's StateInformation Office.

China's government says Falun Gong is a cult that has led more than 1,600 followers to their deaths, mostly by encouraging practitioners to use meditation instead of medicine to cure medical ailments. Officials claim followers also have killed themselves in the belief they will to go heaven when they die.

Falun Gong, however, says its teachings forbid all forms of killing, including suicide.

The group disputed government claims that five people who set themselves on fire on Tiananmen Square in Beijing earlier this year were Falun Gong practitioners.

The meditation sect says the government is running a smear campaign against it and that hundreds of practitioners have died of torture and abuse in police custody during the crackdown on the group.

It said the Wanjia labor camp used torture to make practitioners renounce Falun Gong. Guards doused one practitioner with water and shocked her with an electric baton, and threw 50 female followers into cells with male prisoners after they refused to sign statements denouncing the group.

In Hong Kong, Falun Gong members staged a sit-in protest Wednesday outside China's representative office to call on the United Nations to investigate the deaths.

The sect members accused the Chinese government of "inhumane and beastly crimes."

"S.O.S.: Save Falun Gong practitioners from being killed in China," said one banner displayed during the protest as members practiced their slow-motion exercises.

Lan accused Falun Gong practitioners overseas on having a hand in the suicide.

"Those organizations are using all possible channels to pass on the so-called 'instructions' to the practitioners in the reform camp in order to make them believe that going to heaven after their death is the highest level of practicing," he said. "The mass suicide of June 20 could also be caused through this way."

The government denies that imprisoned Falun Gong practitioners are mistreated.

By John Leicester
© MMI The Associated Press. All Rights Reserved. This material may not be published, broadcast, rewritten, or redistributed