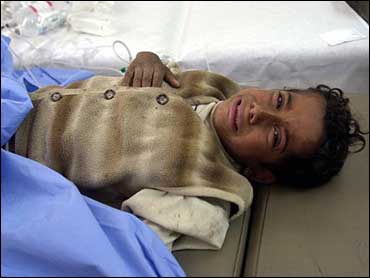 U.S. military planners and intelligence analysts believe Iraqi insurgent leaders holed up in Fallujah will defend the city by combining scrappy fighting with a media blitz designed to provoke a worldwide outcry.

The insurgents understand that they cannot beat the U.S. military, but will probably try to hold off the assaulting forces, killing as many U.S. troops as possible and provoking a backlash in the United States over American casualties, U.S. Army officials say.

"He wants to make it as painful and costly as he can," said Army Maj. Eric Larsen, of the 1st Cavalry Division's 2nd Brigade. "He's testing us. How much are we willing to pay for that real estate?"

At the same time the insurgents will seek to exploit public horror in the Muslim world as well as among U.S. allies over civilian deaths, with the goal of forcing the U.S. military and Iraqi governments to negotiate, Army officials said.

In April, the three-week U.S. siege of Fallujah was called after mounting international pressure over high civilian casualties reported during the assault.

For the insurgents, victory means negotiating an end to the fighting and retaining some control over Fallujah, or at least keeping the Americans out of the city. If they can fight the Americans to a stalemate, it will be viewed as a victory in the Arab world.

"They believe they can achieve what they did in April," said Col. Michael Formica, who commands the 1st Cavalry Division's 2nd Brigade.

"Their goal is to maximize casualties and drag it out. They want to break the will of the United States back home, and bring the Iraqi government to the bargaining table. They want to set conditions to maintain control," he said.

Beyond these broad goals, the aims of Iraqi and foreign fighters differ, American officials believe. U.S. planners have long seen signs of a rift between the two sides.

Iraqi fighters inside the city seek autonomy from the U.S.-allied Iraqi government. They don't want to pursue the battle if the cost means the destruction of their homes and city.

But Muslim mujahedeen, including foreign fighters who have flocked to Fallujah, are thought to be willing to fight and die for the ultimate goal of an Islamic state. For them, Fallujah's destruction is a worthy sacrifice, the officials say.

Formica described Fallujah as the "Super Bowl" for foreign jihadis willing to fight to the death against Christian and Jewish invaders.

Insurgents have had months to prepare their defense. Planners expect the toughest fight in Fallujah's old city and spiritual hub, the northern Jolan district.

The densely populated warren of narrow alleys and attached houses provides the best possible fighting positions for the insurgents, who hope to lure U.S. troops into "killing zones" — choke points with clean fields of fire, or booby-trapped buildings or areas that have been mined with homemade bombs.

Explosives-rigged buildings are such a worry that the U.S. Navy Seabees have established a special team to extract people from collapsed building.

The Army says guerrilla leaders have been training insurgents inside Fallujah, with experienced fighters giving newcomers pointers in bomb-building and other tactics.

The difficult part for the U.S. military will be distinguishing guerrillas from innocent civilians hunkering in their homes over the next few days.

"We want to make sure we're not too hesitant against the bad guys, but at the same time we're taking care of the people we're here to help," said an Army officer on condition of anonymity.