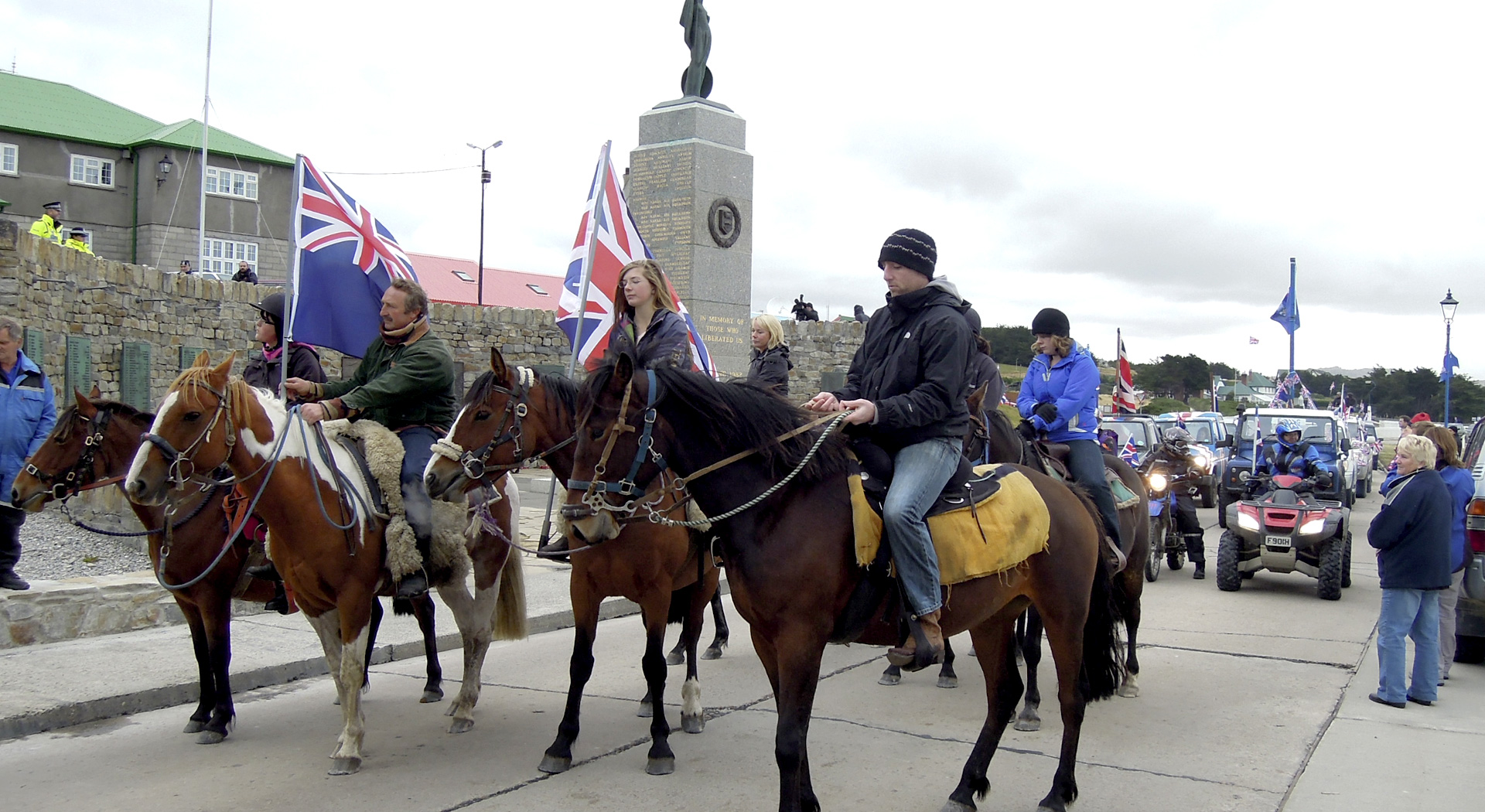 Of the 1,517 valid votes cast in the referendum, only 3 islanders voted "no" to the question: "Do you wish the Falkland Islands to retain their current political status as an Overseas Territory of the United Kingdom?" One vote was somehow lost.

The vote was aimed at showing that the residents' self-determination must be considered in any discussion about the future of the remote South Atlantic islands that are claimed by both Britain and Argentina.

The islands' 2,563 residents did all they could ahead of the vote to show their sympathies, waving Union Jack flags and dressing up in red-white-and-blue.

"The referendum will show the world how we feel, that we are British and that we wish to remain British. We don't want to have nothing to do with Argentina, at all," islander Barry Nielson said as he voted.

The ballot didn't consider any alternatives, such as full independence or some sort of political relationship with Argentina. The Falkland Islands Government had said that if a majority said "no," they could explore alternatives in a second vote later.

The government barred from voting any visiting contractors or personnel from the sizeable British military deployment, as well as anyone who had not resided in the islands for the last 12 months, thus excluding several people with islander status who have chosen to live in Argentina.

Argentines consider the "Islas Malvinas" to be part of their national territory, taken from them by the British more than 180 years ago. One group at the iconic obelisk in Buenos Aires said Monday that it had gathered 100,000 signatures supporting Argentina's claim to the territory and the resource-rich seas that surrounds the archipelago.

The islands' community, which includes families that have worked the land for nine generations, is steeped in British culture, and British Prime Minister David Cameron wrote in the tabloid The Sun on Sunday that "as long as the Falklanders want to stay British, we will always be there to protect them. They have my word on that."

But islanders have worried that British support is not guaranteed. They well remember that Britain was preparing to hand over the islands to Argentina before the military government in Buenos Aires occupied them in 1982, prompting a war that killed 907 people.

Defending them ever since by staffing a large military garrison 8,000 miles (13,000 kilometers) from London has been a costly sore point for Britons facing austerity measures. A Daily Mirror columnist complained about this on Monday, saying that "the result's not in doubt when the Islanders are voting for 'free money.' "

The political columnist, Kevin Maguire, wrote that the UK "spends 75 million euros ($112 million) on troops, missiles, aircraft and warships to guard their sheep lands," an annual military subsidy he calculated at 44,856 euros ($67,000) per island voter.

"It is glaringly obvious that a deal with neighbor Argentina remains the only sensible long-term answer to the Falklands-Malvinas," Maguire concluded.

Argentina maintained that the vote was illegal and that islanders - an "implanted people" - have no voice in a dispute that must be settled bilaterally.

The islanders hope the result will help them keep any deal off the table - and perhaps even persuade neutral nations such as the United States to come down on their side.

Gov. Nigel Haywood is Queen Elizabeth's representative in the islands, a mostly advisory role. The islanders directly elect members of a legislative assembly, and settle all their own affairs except for defense and foreign policy.

"I think countries when faced with the outcome of this will look at it and say ... 'we're in the 21st century, is it right that a country should want to try to take possession of these islands again against the freely expressed wishes of its inhabitants?' Haywood told The Associated Press. "That's just not how countries should act in the 21st century."

Two Falkland Islands lawmakers were already on their way to Washington, preparing to hand-deliver the results of an overwhelming "yes" vote to the U.S. Congress.

"Self-determination is what the United States was founded on and it is a fundamental right. It's a right that they recognize. So I would hope that they would listen to what's happening here today," said another member of the islands' legislative assembly, Dick Sawle.