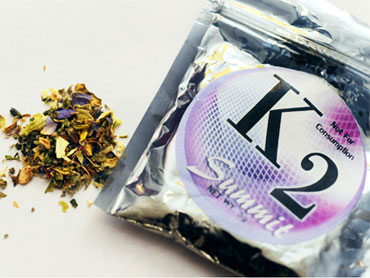 Toxicologists at three universities and two governmental agencies have launched a study into the effects of a synthetic drug being used by some smokers as a legal substitute to marijuana.

The drug is an unregulated mixture of dried herbs, flowers and tobacco that is covered with a synthetic compound purported to give a high similar to marijuana. It is commonly called "K2," Spice," Genie" and "Zohai."

One of the researchers involved in the new study is Dr. Anthony Scalzo, a toxicologist at Saint Louis University. He told The Associated Press on Wednesday that he has seen more than 30 cases of Missouri teenagers having hallucinations, severe agitation, elevated heart rates, vomiting, seizures and other reactions to the substance.

Scalzo, who also directs the Missouri Regional Poison Control Center at Cardinal Glennon Children's Medical Center in St. Louis, said the symptoms suggest the drug affects users' cardiovascular and central nervous systems. He said the symptoms are not typical for those who use marijuana.

"It should not be doing this; it should be doing the opposite," Scalzo said. "They think they're going to mellow, and that's not what's happening."

Scalzo first noticed the pattern in mid-February during a routine review of poison control cases. He said poison control centers from other states, including Oklahoma, Kansas and Virginia, have contacted him with similar cases, but not at Missouri's rate.

"We have the most cases in Missouri of any other state I know of," Scalzo said. "It's a public health issue."

Scalzo said there may be another unknown toxic chemical being sprayed on the dried herb mix or the drug, which was never intended for human consumption, may be too potent.

There have been few studies on its effects, but Scalzo is working with researchers at Harvard University, the University of Massachusetts, the federal Centers for Disease Control and the Missouri Department of Health and Senior Services to study how the synthetic compound affects the human body.

The mix is sold in 3-ounce packages and the contents are not regulated.

"It's not a very precise thing to throw a bunch of garbage in a bag and sell it to somebody," said Dr. Chris Rosenbaum, a toxicologist at the University of Massachusetts Medical School.

Rosenbaum is working with Scalzo on the study, which will look at the effects on emergency room patients.

"There haven't been a lot of studies of what is inside of it," Rosenbaum said. "It's anybody's guess."

In mice, it can lead to a lower body temperature, partial paralysis and the temporary inability to feel pain, according to the federal Drug Enforcement Agency.

The most well-known version of the synthetic compound was created by researchers at Clemson University. Similar compounds have been manufactured by companies in Asia who market the mix as incense or fertilizer. It is legal in the U.S., but has been banned in Russia and most of Europe.

Kansas has passed legislation to ban the substance, and the bill is pending before Gov. Mark Parkinson. Similar legislation also has been sponsored in Missouri.

The Missouri House briefly discussed the bill Wednesday. Several lawmakers questioned whether the state is moving to place too tough of restrictions on the substance.