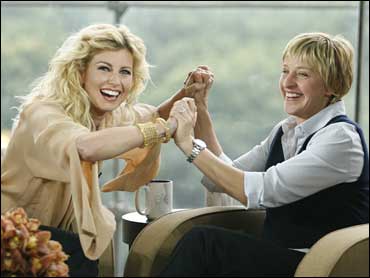 Country singer Faith Hill stands by her man - and isn't ashamed about it.

During an interview scheduled to air Wednesday on "The Ellen DeGeneres Show," Hill set the record straight about the recent YouTube video that has brought national media attention to her and her husband, well-known country singer Tim McGraw.

While McGraw was greeting fans during a concert in Lafayette, La., in late July, an overly aggressive woman reached out and inappropriately grabbed McGraw's crotch. Hill told the fan, in no uncertain terms, that her conduct was inappropriate. A video of the singer calling out the fan quickly made its way onto YouTube.

Photos: My Favorite Photos: The ACMs

Hill's interview was taped Aug. 31 during the fifth season launch of "Ellen" at Lincoln Center in New York. It was there that DeGeneres asked the question a lot of people had wanted to ask: Was she watching when the woman groped her husband?

"I didn't. I didn't watch it happen. My husband found me underneath the stage just before we go out to do my duet … for the last segment of the show. He tells me what happened and he was livid. I mean, he was red and fuming. He basically just reprimanded her, so I thought, basically, she doesn't need any more attention and I'm going to not deal with it - so I decided to go about my business, and I'm here to have fun and give the fans a great show," Hill said. "But really, I'm from Mississippi, so what I really wanted to do is kick her you-know-what. You know what I'm saying? I mean, c'mon. I mean, how disrespectful! And plus, it's like sexual harassment."

DeGeneres pointed out that there hasn't been any footage released of McGraw reprimanding the overly eager and nervy fan, but Hill said that since there's all kinds of footage on the Internet, it's bound to turn up somewhere.

Hill is no stranger to YouTube. She appeared on the popular Web site in what people thought was her negative reaction to country singer Carrie Underwood's win during the Country Music Awards last year.

"Because the joke was on me, I was making fun of myself - and no one got that. It's like I wasn't upset about it. Of course we all know she (Carrie Underwood) was going to win. I support her 100%. She has been phenomenally successful," Hill said.

Hill and McGraw, who have three daughters, will celebrate their 11th anniversary next month.