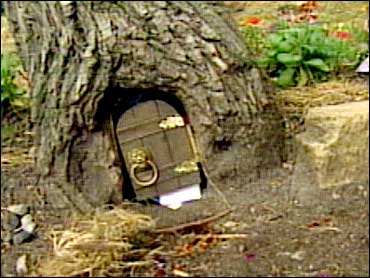 Remember when you were a kid and all of life was magical and fairy tales were true? The Early Show Correspondent Melinda Murphy reported on a real-life fairy tale, of sorts.

This tale, however, takes place in Minneapolis.

Once upon a time — nine years ago to be exact — an elf moved into a tree right next to Lake Harriet. And that tiny elf still lives there today. No one, however, has ever seen him.

"Do you think he's going to come out?" asks one child. His question is met with pessimistic answers.

But if they can't see him, then why do so many kids write him?

They write him because the elf reponds with letters back to them.

"He told me he had a princess daughter," said one girl.

Mr. Little Guy is the name of the mystery writer. Every day, children leave letters behind a door for him. And, he answers each and every one of them.

All the letters have caused a stir. So, Murphy applied her reporting skills to track him down.

Murphy, however, may have to bend down during the interview because, as the name suggests, the children believe Mr. Little Guy to be only six inches tall. But that has not been confirmed. The stage was set for the big interview with the secretive elf, who asked not to be identity.

Mr. Little Guy said many has asked him his height.

"I'm taller than my younger brother and shorter than my older brother," he would reply.

Others would ask for his description. He would answer, "Well, as you can see. I look just like my dad."

Kids think he wears a red little hat a brown shirt and a green vest and some blue pants.

One girl thought Mr. Little Guy had a diet of grass and seaweed.

Actually, he eats minnows most of the time.

"Minnow pizza is great," he said.

And how does he spend his time?

"Oh, same old thing everybody else does," Mr. Little Guy said. "Get up. We brush our teeth … and go for swim in the lake. Get dressed. You know, talk to the insects. See what's going on."

He also answers children letters left for him at a nearby tree.

But the kids never see him.

"I've almost been caught a couple of times," Mr. Little Guy said. "I had to scamper up the tree, get out of the way. It's really embarrassing in the morning when I'm just in my pajamas."

Every summer, Mr. Little Guy answers 1,500 letters. Parents are grateful for his deeds.

"I think it's a pretty special person that would take the time to think of other kids," said one mother.

Mr. Little Guy says he doesn't see himself retiring from collecting and writing letters in the future, which may make many kids of Minneapolis very happy.

But, many find it hard waiting for his reply to their letters.

"I don't want to go home," one child screamed. But another kid assures the upset child that leaving assures a letter back from the elf.

Another thing Mr. Little Guy does is sign every note with the phrase: "I believe in you." Mr. Little Guy says he wants kids to believe that they can be anything they want to be.