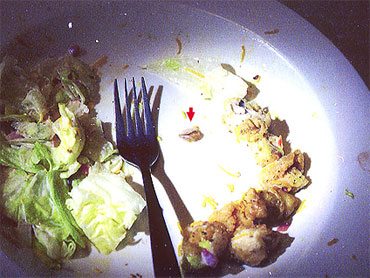 The anti-Bush documentary took in a whopping $21.8 million in its first three days, becoming the first documentary ever to debut as Hollywood's top weekend film.

If Sunday's estimates hold when final numbers are released Monday, "Fahrenheit 9/11" will set a record in a single weekend as the top-grossing documentary ever outside of concert films and movies made for huge-screen IMAX theaters.

Adding the film's haul at two New York City theaters where it opened Wednesday, two days earlier than the rest of the country, boosted "Fahrenheit 9/11" to $21.96 million.

"Fahrenheit 9/11," Moore's assault on President Bush's actions after the 2001 terrorist attacks, won the top honor at last month's Cannes Film Festival and has attracted attention from both sides in the presidential campaign.

The movie has been embraced by left-wing groups, which mobilized members to see it during the opening weekend. Conservative groups sought to discourage theaters from showing it and asked the Federal Election Commission to examine its ads for potential violations of campaign-finance law regulating when commercials may feature a presidential candidate.

"I want to thank all the right-wing organizations out there who tried to stop the film, either from their harassment campaign that didn't work on the theater owners, or going to the FEC to get our ads removed from television, to all the things that have been said on television," Moore said. "It's only encouraged more people to go and see it."

Moore, who's made no secret of his personal opposition to President Bush, also said he believes the film will convince "a lot of swing voters, independents and even Republicans."

Moore said "Fahrenheit" sold out in Fort Bragg, N.C., and Peoria, Ill., states that went to Bush in the 2000 presidential election. "It sold out in red states throughout the country," he said.

The Wayans brothers' comedy "White Chicks," about two black FBI agents who go undercover as white debutantes, opened in second place with $19.6 million for the weekend. That pushed the total for "White Chicks" to $27.1 million since opening Wednesday.

The previous weekend's No. 1 movie, "Dodgeball: A True Underdog Story," slipped to third place, taking in $18.5 million and pushing its 10-day total to $67.2 million. Steven Spielberg and Tom Hanks' "The Terminal" fell from second to fourth place with $13.9 million, raising its 10-day gross to $41.8 million.

Despite good reviews, the family film "Two Brothers," about tiger siblings separated in youth and reunited as opponents in the ring as grown cats, opened weakly at No. 9 with $6.2 million.

Distributors Lions Gate and IFC Films plan to put "Fahrenheit 9/11" into a couple of hundred more theaters this Wednesday, when competition heats up with the release of "Spider-Man 2," summer's most-anticipated movie.

Lions Gate and IFC came on board after Disney refused to let subsidiary Miramax release "Fahrenheit 9/11" because of its political content. Miramax bosses Harvey and Bob Weinstein bought back the film and went looking for independent distributors.