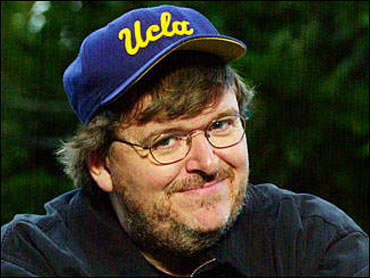 Republicans initially dismissed "Fahrenheit 9/11" as a cinematic screed that would play mostly to inveterate Bush bashers. Four weeks and $94 million later, the film is still pulling in moviegoers at 2,000 theaters around the country, making Republicans nervous as it settles into the American mainstream.

"I'm not sure if it moves voters," GOP consultant Scott Reed said, "but if it moves 3 or 4 percent, it's been a success."

Two senior Republicans closely tied to the White House said the movie from director Michael Moore is seen as a political headache because it has reached beyond the Democratic base. Independents and GOP-leaning voters are likely to be found sitting beside those set to revel in its depiction of a clueless president with questionable ties to the oil industry.

"If you are a naive, uncommitted voter and wander into a theater, you aren't going to come away with a good impression of the president," Republican operative Joe Gaylord said. "It's a problem only if a lot of people see it."

Based on a record-breaking gross of $94 million through last weekend, theaters already have sold an estimated 12 million tickets to "Fahrenheit 9/11." A Gallup survey conducted July 8-11 said 8 percent of American adults had seen the film at that time, but that 18 percent still planned to see it at a theater and another 30 percent plan to see it on video.

More than a third of Republicans and nearly two-thirds of independents told Gallup they had seen or expected to see the film at theaters or on video.

"Fahrenheit 9/11" opened in June mainly in locally owned arts theaters that specialize in obscure films and tiny audiences. Drawn in part by the buzz surrounding the film, people packed the theaters and formed long lines for tickets. Within a week, it was appearing in chain-owned theaters along with "Spider-Man 2," "The Notebook" and other big summer attractions.

When he sat down to watch the film at the Varsity Theater in Des Moines last weekend, Rob Sheesley didn't harbor anti-Bush feelings. Two hours later, he left with conflicted emotions.

"You want to respect the president," Sheesley said. "It raised a lot of questions."

Bush's leadership in the wake of the Sept. 11, 2001, terrorist attacks had impressed retired teacher Lavone Mann, another Des Moines moviegoer. After watching the film, Mann wanted to know more about its claims.

"I guess that I think it makes me want to pursue how much of it is accurate and not just get carried away with one film," she said. "I don't hear Bush and (Vice President Dick) Cheney saying that this is incorrect."

Retired college professor Dennis O'Brien, a Bush voter in 2000 and a movie buff who has seen other Moore films, said "Fahrenheit 9/11" hasn't changed his view of Bush but may well serve a larger purpose by sparking debate.

"Moore forces you to think about the role of oil in the politics of American life," O'Brien said. "This goes back a long way."

"I don't consider myself a Republican or a Democrat. I just vote for whoever is right for the job," the University of South Carolina student said. "I think most people don't bother to really research, and all they need is something popular to sway them."

Others at the screening in Columbia were put off by what they saw as the film's biased approach to examining Bush and the reasons he took the country to war. For Scott Campbell, 19, the movie reinforced his apathy toward politics.

"We didn't even stay to see the whole thing," Campbell said. "It was one-sided."

Former Iowa Republican Party chairman Michael Mahaffey said the movie's impact could be dulled over time. "It's July," he said. "Conventional wisdom will change completely every four or five weeks."

Still, "Fahrenheit 9/11" is likely to gain an even wider audience when it's released on home video in the weeks before Election Day. The Gallup survey found that nearly half of the Republicans and independents who expect to see the film said they were likely to view it on video.

"In all honesty, in a very close election, who knows what will sway the public?" Mahaffey said.