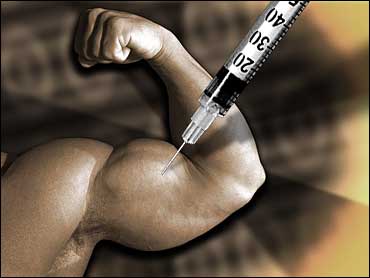 Pro wrestler Chris Benoit, his wife, and his son were found dead in their
home in Fayetteville, Ga. near Atlanta earlier this week.

The deaths are suspected to be a murder-suicide that began over the weekend when Benoit allegedly killed his wife and son and ended on Monday when Benoit hanged himself.

Authorities have reportedly found anabolic steroids in Benoit's home, spurring speculation that so-called "'roid rage" may have been a factor.

In an interview with WebMD, Gary Wadler, MD, answered questions about 'roid rage and anabolic steroids, which are synthetic substances related to male sex hormones.

Wadler is a clinical associate professor of medicine at New York University's medical school. He is also a spokesman for the American College of Sports Medicine, a member of the World Anti-Doping Agency, and the author of the textbook, Drugs and the Athlete.

What is 'roid rage?

'Roid rage, in many ways, I would characterize as a form of loss of impulse control. It provokes overreactions via a stimulus that normally doesn't produce such a severe reaction.

So say somebody says something to you that you don't like. You may put your fist through a wall. The impulse is there; it's overreaction. Forget the 'roid, for the moment. It's a rage ... and that rage is precipitated by the brain being exposed to anabolic steroids.

How common is it?

I don't think there's really good data on how common [it is]. It's not rare
by any means, that's probably fair to say. It's not extraordinarily common.

I think a better way to view this is a spectrum of behaviors by people on anabolic steroids ranging from being somewhat more assertive, moving up one notch to being frankly aggressive, and moving up another notch to actually having this roid rage. It's really an extreme of a spectrum of kind of behavioral things that you see with anabolic steroids.

Yes. It's been implicated in a number of murders and can result in extreme
aberrations of behavior including the taking of one's life.

Another thing you have to be mindful of -- it may unmask an underlying
psychiatric disorder that has been basically kept in check until the individual is exposed to this category of drugs. And so what you may be seeing is unmasked psychiatric disorder.

Are there some people who may be particularly vulnerable?

I don't know if that's been studied, but certainly, I would be concerned about those who are on steroids for a long time on a high dose. There seems to be some correlation that the higher the dose, the greater the likelihood of having 'roid rage.

What is the difference between anabolic and corticosteroids?

The way I like to say it is it's the difference between John Smith and Mary Smith. They're both Smiths, but they couldn't be more different.

Anabolic steroids mean steroids that build muscle, retain protein, and
corticosteroids are so-called catabolic. They break down tissue. They're basically used for anti-inflammatory effects. People on corticosteroids for any length of time, you'll see them actually get muscle weakness. Their body will go through changes which are quite the opposite of what you see with anabolic steroids.

I don't believe that the shorthand-word "steroids" should ever be used because the public has been confused, and many people who are taking corticosteroids for a variety of medical illnesses are of the belief that they're going to get all these horrible side effects that people talk about in terms of anabolic steroids.

So people who are taking corticosteroids for legitimate medical reasons like asthma or arthritis -- they have no need to be concerned?

Aren't there some people who experience temperament changes while they're on corticosteroids?

They can be irritable. They can have difficulty sleeping, for example.

But that's not the same?

No, it's entirely different.

Are there any valid reasons for people to be taking anabolic steroids?

Well, there were many reasons. Most of those reasons diminished [with the development of] better drugs.

If someone is experiencing more rage while they're taking anabolic steroids, is there treatment for it?

If somebody is experiencing that, chances are they are using it for illicit purposes. So they've got to get themselves in the hands of a psychiatrist. And you have to be careful, because if you suddenly stop anabolic steroids, it can precipitate a profound depression.

Are there signs that parents or coaches should keep in mind -- signs that a child, an athlete, may be using steroids?

One is change in musculature. Secondly, excessive acne. Third, irritability. Fourth, obsessing over muscle mass ... and becoming obsessed with the gym. Those would be sort of some of them. It's basically a change in personality, an obsession with your body and putting on muscle and increasing lean body mass, [excessive] use of dietary supplements, obsessing over web sites that are directed towards body building.

It's a little bit of a complicated question. If you talk about a [male]
teenager, you have to distinguish between a normal adolescence, which is heralded by a surge in testosterone. If it's a difficult adolescence [in someone] who is not on anabolic steroids, they have a lot of acne, may be very irritable and may get many of the kinds of things we associate with anabolic steroids. Except in that case, the steroids are coming from his own testicles.

So it's a difficult thing for parents. They may overlook the abuse of
anabolic steroids, or conversely, they may take [someone] who's not on anabolic steroids and assert that they are and lose the confidence of their kid.

How young does some of this use begin?

There are estimates that between half a million and a million youngsters have used anabolic steroids.

Is it very easy for them to get it?

Particularly with the Internet, it's alarmingly so. And it also has much of the dynamics of other forms of drug dealing. They're not philanthropists handing out steroids.

What else would you want to add, either about roid rage or anabolic steroid use?

My concern is that it's a silent epidemic. [With drugs such as heroin and cocaine], you see people who don't look well, are losing weight, they're not concerned about their body. [People using anabolic steroids] look well, they're putting on muscle mass, they're more assertive, and so people don't think that this could be the product of illicit drug use.

People have to be aware that this is a very dangerous behavior. We have to make -- particularly parents and physicians -- aware of this silent epidemic.