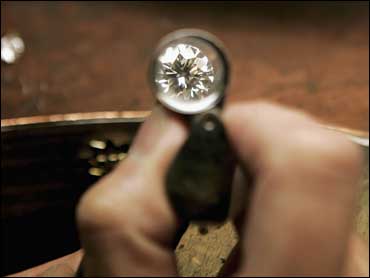 Sierra Leone's traffic in diamonds has left a trail of carnage. While they may seem a symbol of happiness, the reality of the gems is far from that.

What are conflict diamonds?

Conflict, or blood diamonds are mined in a war zone and sold, usually clandestinely, in order to finance an insurgent or invading army's war efforts.

How can I ensure a diamond is conflict-free?

The Kimberley Process is a joint government, international diamond industry and civil society initiative established in 2002 to stem the flow of conflict diamonds - rough diamonds that are used by rebel movements to finance wars against legitimate governments. The trade in these illicit stones has contributed to devastating conflicts in countries such as Angola, Cote d'Ivoire, the Democratic Republic of Congo and Sierra Leone.

Click here for states and regional economic integration organizations who have met the minimum requirements of the Kimberley Process Certification Scheme.

How many conflict diamonds are there?

What areas of the world are affected by conflict diamonds?

The fighting that is fueled by the trade in conflict diamonds has been relegated to a few Central and West African countries. Many of these countries have diamonds that are easier to mine and thus more readily available to smuggle, according to the Kimberly Process.

To learn more about conflict diamonds:

• To find out the latest news and information on conflict diamonds, you can refer to the World Diamond Council.

• Click here to read more about Sierre Leone in a CBSNews.com interactive.

• You can read about the Diamonds Are For Never campaign here.