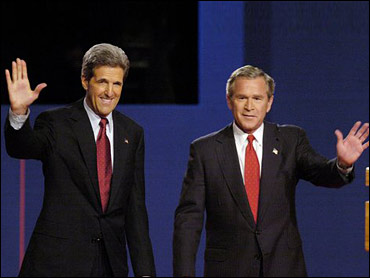 President Bush overlooked a flip-flop of his own when he boasted Wednesday about launching the Homeland Security Department: He was against it before he was for it. John Kerry told Americans he has a health care plan that covers all of them, when he doesn't.

Figures and rhetorical claims flew in the last presidential debate, and not all them were on target.

But in March 2002, Bush indeed said, "I truly am not that concerned about him. I know he is on the run." He described the terrorist leader as "marginalized," and said, "I just don't spend that much time on him."

Kerry declared, "I have a plan to cover all Americans" with health insurance, but even his campaign does not contend his blueprint would eliminate the ranks of the uninsured. Independent analysts say full implementation of Kerry's plan would extend coverage to about 25 million of the nearly 45 million uninsured.

He also said Bush has cut Pell grants, but later altered the accusation when the president pointed out accurately that about 1 million more students are getting the aid than when he took office. Kerry then said Bush has not raised the maximum Pell grant as much as promised.

"They're not getting the $5,100 the president promised them," he said. Education Secretary Rod Paige said the month after Bush took office that the maximum grant for first-year students would go up by more than half, to $5,100. But the maximum now is $4,050.

Also in the debate: