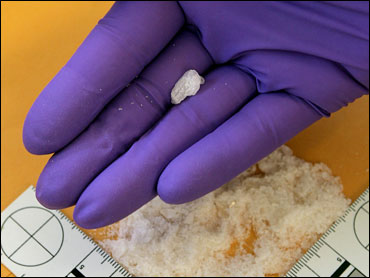 They are portraits of self-destruction.

A death march under a microscope. A jailhouse gallery of lives laid waste by meth addiction.

Forty-two year old Teresa Baxter, after 2 1/2 years on meth, now can't stand the sight of herself.

While booking suspects into the county jail, King spotted a grisly trend in how mug shots of many repeatedly arrested meth users changed over time. When looking at earlier pictures of future addicts, "there's life in their face," King said.

"There's life in their eyes. Then you switch to the second picture and that life is gone," King said. "Look at their eyes. Their soul seems to have left their body."

From cold tablets, alcohol, lithium in batteries and the deadly ammonia often stolen from farm fertilizer supplies, meth is a chemical jambalaya that can be cooked quickly and cheaply into rocks with more kick than cocaine.

"This stuff is powerful, makes people do crazy things," Baxter said. "People do outrageous things on this stuff."

Today Oregon treats more meth addicts per capita than any other state. But photographs of ravaged faces give only a hint to the damage meth does to the mind.

They almost look like they've been given either a life sentence or a death sentence.

"I think the death sentence," said King. "The latter of the two is probably most accurate."

Teresa Baxter wants to be a living lesson to anyone thinking of trying meth.

Bret King will take his Faces of Meth to Portland area schools.

"I'm letting them hear it straight from the horse's mouth, and if that is not testimony to what this drug will do to you, it will — there's no question — it will happen to you."

The Faces of Meth — it is a reality show that's all too real. And nobody wins.