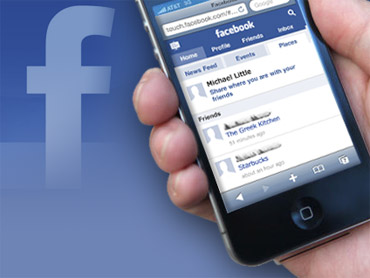 Basically, it means enables users to share their exact location with their friends who are fellow users -- or perhaps complete strangers.

Facebook isn't the first to embrace geo-tagging. Sites such as Twitter and Foursquare have been doing it for a while now.

Are there dangers associated with using such services? How easy is it for strangers to learn your location or that of your kids?

On "The Early Show" Wednesday. Linendoll told co-anchor Erica Hill geo-tagging "is an exploding trend in the mobile arena. You can actually share your location, wherever you are, with a cell phone. And your friends can see … where (you are). You can see where your friends are.

"So, say I 'check into' Starbucks. It's not gonna say, 'You're at Starbucks." It's gonna show exactly where I am on a map."

And that, observes Linendoll, can be "really dangerous. I always say, location-based networks, broadcasting your location to an entire network of people isn't always a good thing. If I say that I'm on vacation in Los Angeles for a week, that also says my place is completely empty for a week. If you have somebody kind of semi-cyber-stalking you or somebody upset with you, you say you're gonna be at the mall -- not always a good idea."

Hill noted that Facebook "constantly" updates its privacy settings, sometimes without the knowledge of users, who suddenly find themselves "broadcasting" their information to more people than they intend to.

"Inadvertently," Linendoll agreed. "Something good about Facebook Places - and they really -- and they nailed it this time around because, of course, we've seen over the past few years they've been under the gun with privacy issues. This is an opt-in feature. And, if your friends are gonna say, 'Hey, I'm out with you,' and tag you, as it's called, you actually have to confirm it.

"But what's really interesting (is that with) a lot of smart phones, if you're sending a picture text, what a lot of people don't realize is, there's little crumbs of data and geo-tagging in each photo you take. So, even if you're not broadcasting your location, if you just put a photo up on Twitter or Facebook, sometimes that information, your exact longitude and latitude is attached to that photo. A lot of people don't realize that they're inadvertently sharing that location without broadcasting it," though, as Hill pointed out, that's a feature someone could disable on his or her phone.

Kids, Linendoll noted, "are more tech-savvy than older generations, but what they need to realize is, sometimes saying, 'Hey, I'm going out with a friend at the mall" to them isn't as scary, but to someone in their 50s, they might realize the repercussions."

So what should a parent say to kids about geo-tagging services?

"The key," Linendoll responded, "is wrapping your head around all of these technologies and understanding, each one is different and each one has different privacy settings. So, if you know at least know the key words, know what Foursquare is, know what Gowalla is, Facebook and Twitter, and know what they do, and maybe sit down with your kids and go through the privacy settings, to make sure they're protected, I think that is a great step in the right direction."

Linendoll added, "There's (also) a lot of positives that come with this. … There are some great things. And of course, there are these serendipitous meet-ups. If you're out grabbing coffee and someone's two blocks away, you can see that on the map. If you're out at a huge concert, what if five of your friends are there? Kind of a big deal.

"But I think my favorite (advantage)is incentives, which is why this is extremely growing in terms of mobile applications. Retail shops, bars and stores are now offering incentives, places like Macy's and Starbucks and Dominos and Pizza Hut are giving free gifts if you check into their places often."

Places, Linendoll says, is "really intuitive" and "easy to understand."