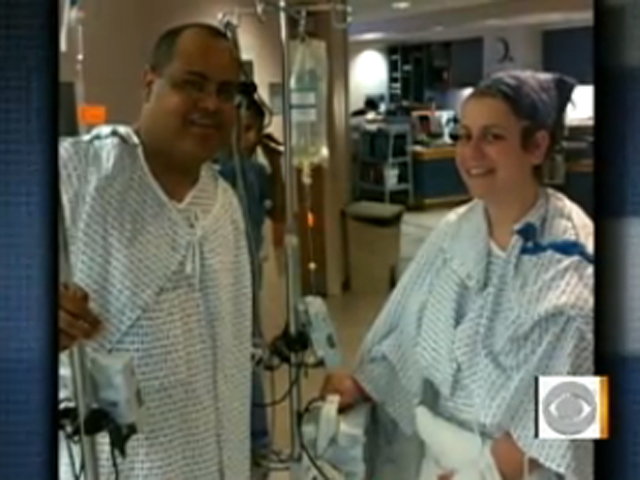 Half a billion people use Facebook to connect with friends, lovers, and colleagues. And now, it's saving lives by linking potential organ donors with patients who need them.

On "The Early Show," CBS News correspondent Michelle Miller shared the story of one perfect match found on Facebook.

As the youngest mayor of East Haven, Conn., April Capone knows the importance of "pressing the flesh," as she shakes the hands of many people she meets. But thanks to a post that hit her Facebook page in late 2009, she's taken it one step further.

Capone said it was "an SOS" for help.

The message came from Carlos Sanchez, who was in the throes of renal failure after his first transplant failed. Sanchez faced another lengthy wait for a healthy organ. With no relatives who were a match, his doctor suggested he turn to his Facebook family.

Sanchez told CBS News, "All of a sudden, I get that private text, and I didn't pay it no mind. I didn't answer her. I thought she made a mistake.."

A few hours later, a second message came through.

Capone read the message she sent to Sanchez: "Carlos, I'll get tested, I've got two, so what the hell? You can have one."

Sanchez said of the message, "I thought, what are the odds that she would be a match?"

Turns out, she was, and in April of 2010, doctors removed April's left kidney and gave it to Carlos.

Facebook tells CBS News it does not track or police these types of posts. But it has noticed what appears to be an increase in the number of users soliciting kidney donations on its website.

The official organ donor list - regulated and funded by the federal government - has a typical wait time of three-to-five years, and only draws organs from the deceased.

That absence has spawned websites, such as MatchingDonors.com, that match potential live donors with recipients. Like Facebook, they're not subject to federal oversight and, while Klitzman acknowledges that these sites do help save lives, he favors a more formalized protocol to reduce foul play -- like paying for organs.

Klitzman said, "What we need is a coordinated system to ensure that as many people can get organs from as many people who are willing to give as possible."

Sanchez says if it weren't for Facebook, he wouldn't have had his transplant.

A year later, Sanchez's health has been restored.

Capone said of Sanchez, "Carlos wasn't my brother, but he is now."

He told CBS News, "Because of her, I'm able to see my son graduate this year."

"Carlos (had) already had a kidney transplant, that one had failed. He was about to need to be re-listed on the (organ donor) list, and the average waiting list for a kidney is three and a half years. ... In those situations, really (what) you need to do certainly is to reach out for other resources like this. ... It will be becoming more common."

Co-anchor Erica Hill noted, "It's a wonderful incredibly selfless gesture (being a donor), but it doesn't come without risk."

"We're hearing more and more about donating part of your liver, part of the lung, part of the pancreas or part of the intestines -- not as common as whole solid organ transplantation, but becoming more so," she said.

Ashton, who spent six months working with a heart transplant unit, said she got a first-hand look at what's involved for organ donors and their families.

"What most people don't realize (is that when) you're talking about a deceased organ donor, that person is brain dead. They're still technically alive, but brain dead, and most of the time, the relatives are the ones who make that decision to donate organs," she explained.

"This is actually something you want to talk to your friends and family about and let them know your wishes," Ashton said. "When you talk about the opportunity of taking a tragedy or a sorrowful experience and making it into a positive one, solid organs can save eight to nine lives per organ donor, and when you talk about donating soft tissue and organs, up to 50 lives can be saved. It's incredible.