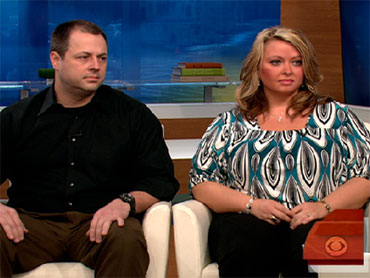 Everyone you consider a "friend" on Facebook, may not have the friendliest intentions. That was the hard lesson homeowners in New Albany, Ind., believe they learned after their home was ransacked by two men.

Keri McMullen and Kurt Pendleton left a status update on Facebook Saturday night that said they wouldn't be home because they were going to a concert in nearby Louisville at 8 p.m.

At 8:42 p.m., two burglars entered their house, using a screwdriver to force open a back door. However, luckily for McMullen and Pendleton, they had recently installed a surveillance system in their home. The cameras caught the entire episode on tape.

The video shows the two men going through McMullen's purse, stealing electronics -- more than $10,000 worth -- including a plasma television right off the wall. The burglars are then seen driving away with a laundry basket filled with the stolen goods.

After posting images of the suspects on Facebook, McMullen realized one of them had "friended" her about six months ago. She says he grew up across the street from her and hasn't seen him in more than 20 years.

On "The Early Show," McMullen said after looking over that Facebook "friend"'s page, she thought the man in the surveillance video was him.

She added the man hasn't been positively identified by police yet, so she's not 100 percent sure.

"Early Show" co-anchor Maggie Rodriguez added that if the surveillance camera hadn't captured the burglary, this person wouldn't have been suspected in a million years.

Pendleton agreed, adding that the couple had installed the cameras not a week before the robbery. He added that the couple didn't even intend the camera for robbery purposes. He said they just wanted to monitor potential homebuyers as they walked their home, which is up for sale.

He said, "I wanted to see who was coming because something got broken that was important to her, so I said, 'I'm going to install these cameras and be done even though we're moving in a couple of months.' So we installed, and just four days later we're catching someone on camera stealing everything on the first floor, pretty much."

Aside from the theft of the costly electronics, McMullen said she misses her grandmother's ring the most.

"It was her wedding band," she said. "And it was in our bedroom in a jewelry box. And they took that. That's the only thing that's not replaceable. So I would really like to have that back."

McMullen said police have leads and are talking to witnesses.

As for Facebook, McMullen said she hasn't been back on the site since the robbery.

"I think the social networking sites are good to have," she said. "You just have to be smart about it. Because just because you're trustworthy and a nice person does not mean everyone on your Facebook is. So you can't put your address -- my address wasn't even listed -- or your phone number or that you're home alone or going out of town."

Rodriguez added, "Because just because you called them Facebook friends didn't really mean they're your friends."

McMullen responded, "Correct. I have a lot of those on my page."

Anyone with information about the burglary is asked to call the Floyd County Sheriff's Department: (812) 948-5407