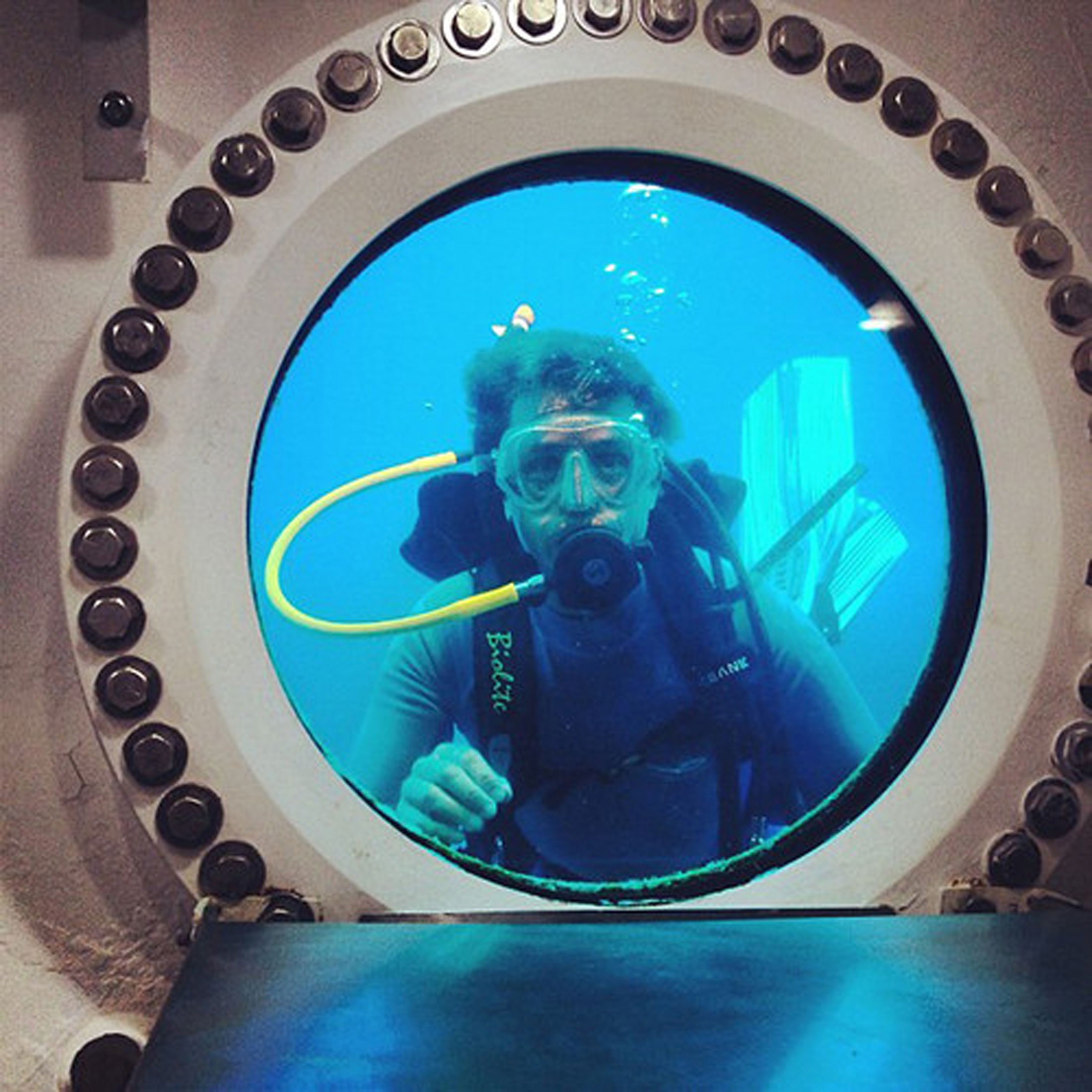 Fabien Cousteau has spent the last three weeks living in the fishbowl known as Aquarius, the only undersea laboratory in the world.

Cousteau, the grandson of famed ocean explorer Jacques Cousteau, is attempting to break his grandfather's record of time spent underwater by spending 31 days under the waves off the coast of Key Largo, Florida.

The lab, roughly the size of a schoolbus, is about 50 feet below the ocean's surface, about 3 miles off Key Largo.

Inside are all the conveniences of a small apartment - a stocked kitchen, air conditioning, even Wi-Fi and bunks to sleep six, reporter David Sutta of CBS Miami station WFOR-TV reports.

Everything from food to dry towels is delivered by boat and sealed in a large pot and hand-delivered by scuba divers daily.

"It's strange, but I don't really miss much up there. I actually am very comfortable down here," Cousteau said.

Maybe it's in the genes.

Cousteau is following in the fins of his grandfather - famed Jacques Cousteau, an underwater pioneer who explored and brought back images from the deep to television sets.

The elder Cousteau won an Academy Award in 1963 for his underwater documentary "World Without Sun."

He dreamed of society living in underwater villages, even going as far as spending 30 days in one he created.

"We know so little about the ocean. We've explored less than 5 percent to date," said Fabien Cousteau.

To bring the attention to the sea, Fabien Cousteau has revived his grandfather's vision of life under the sea.

CBS News interviewed Cousteau hours before he made his plunge June 1 in an expedition he calls "Mission 31."

"If we don't spark the interest of our upcoming generations in terms of ocean exploration, we are faced with some of the most dire consequences that human beings have ever faced," he said.

There is also the risk he is putting himself in. One wrong move could be deadly.

The team spent two weeks training for every plausible disaster.

In a drill, he flooded his mask. He must remain calm while holding his breath and clearing the water out. In an emergency like this, most people would simply shoot for the surface. Down there, it's the worst thing you can do.

"We are not allowed to go back up to the surface," Cousteau said. "Well, quite simply there's problems with embolisms. Quite literally things as bad as possible paralysis and death."

Instead, it takes 18 hours to surface. That's the time it takes to slowly let a buildup of gases trapped in your body safely escape.

But Cousteau is not in any hurry to leave. His team of scientists are spending their days carrying out extensive experiments.

He plans to come out July 2. If he does, he will have spent 31 days below the surface, one day longer than his grandfather.

"It was never impressed on us to follow in the family tradition. But once you get immersed in the ocean world it's impossible to turn your back on its beauty and its majesty," he said.

American detained in N. Korea: I went to do God's work
Thanks for reading CBS NEWS.
Create your free account or log in
for more features.
View CBS News In
CBS News App Open
Chrome Safari Continue
Be the first to know
Get browser notifications for breaking news, live events, and exclusive reporting.