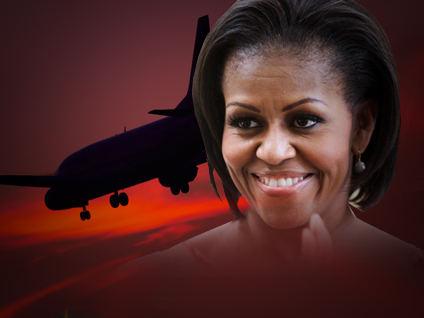 WASHINGTON - The Federal Aviation Administration took new steps Wednesday to fix problems in the nation's air traffic control system, firing two controllers for sleeping on the job and ordering a higher level of supervision over aircraft carrying the first lady or vice president.

The new air traffic rules and the firings come as the FAA struggles to reassure the public that air travel is safe. The agency has been shaken by a series of embarrassing incidents, including five cases of controllers falling asleep on the job, a controller caught watching a DVD movie at his post and an aborted landing this week of a plane carrying Michelle Obama and Vice President Joe Biden's wife, Jill.

The controllers fired Wednesday were assigned to radar facilities in Miami and Knoxville, Tenn. They had been found sleeping during overnight shifts, according to the FAA, which had disclosed the incidents previously.

Under the new air traffic rules, flights carrying Mrs. Obama or the vice president will be handled by an air traffic supervisor rather than a controller, the agency said. The new rules apply to approaches and departures handled by a regional air traffic facility in Warrenton, Va., and takeoffs and landings at Andrews Air Force Base in Maryland, where the presidential fleet is based.

Also on Wednesday, the National Transportation Safety Board said it has opened an investigation into the aborted landing of Mrs. Obama's plane.

The FAA moved swiftly in the case of the Miami controller, whom the agency said was found sleeping at about 5 a.m. Saturday at a regional radar facility that handles high-altitude air traffic for portions of Florida, the Atlantic Ocean and the Caribbean Sea. A preliminary review of air traffic tapes indicated he did not miss any calls from aircraft and there was no impact on flight operations.

The Knoxville incident occurred on Feb. 19 at a radar facility at the McGhee Tyson Airport. Officials said the controller made himself a makeshift bed and deliberately slept for about five hours despite attempts by a co-worker to wake him.

The aborted landing involving Mrs. Obama's plane occurred Monday at Andrews Air Force Base just outside Washington. While aborted landings are not unusual, and the first lady apparently wasn't in serious danger, the episode became another embarrassment for the FAA. The incident occurred at about 5 p.m., when a Boeing 737 belonging to the Air National Guard, one of several guard planes used by the White House, came within about three miles of a massive C-17 cargo plane as the planes were approaching Andrews to land, according to the FAA and a base spokeswoman.

The FAA requires a minimum separation of five miles between two planes when the plane in the lead is as large as the 200-ton military cargo jet, in order to avoid dangerous wake turbulence that can severely affect the trailing aircraft.

The required separation between the two planes "was compromised," the NTSB said in a statement Wednesday.

The White House continued to refer questions about the incident to the FAA, although press secretary Jay Carney told reporters traveling aboard Air Force One with the president to California that he understood there was "no imminent danger for the first lady or Dr. Biden or anyone else on the plane." Carney said he had not spoken with the president about the incident.

The FAA is also investigating the incident as a possible error by controllers at the Warrenton regional facility.