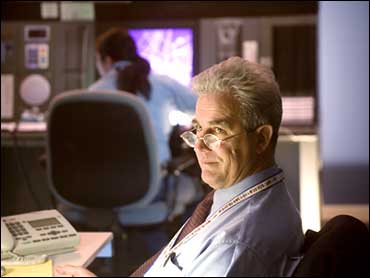 Mental reruns of Sept. 11 go through everyone's mind now and then. Ben Sliney, a key player in bringing that day's air-traffic crisis under control, relived his Sept. 11 on a movie set.

Sliney, the Federal Aviation Administration operations manager who gave the order to ground all planes after the terrorist attacks, plays himself in "United 93," an agonizing account of the jet that crashed in rural Pennsylvania after passengers fought back against hijackers.

Sept. 11 was Sliney's first day on the job. "United 93" traces his morning in detail as he arrives to a warm welcome from colleagues, responds to the growing number of potential hijackings, reacts in horror over the World Trade Center and Pentagon attacks and finally issues the unprecedented command for 4,000-plus planes to land.

"When I issued that order to land regardless of destination, we were just trying to do something to try and resolve what was occurring and at least separate the good guys from the bad guys," Sliney said.

Shot in docudrama style, the film uses a cast of unknown actors and plays out roughly in real time, opening with re-creations of passengers checking in at Newark airport for the San Francisco-bound Flight 93, including the four terrorists who hijacked the plane.

The film cuts back and forth from air-traffic towers, an Air Force command center, Sliney's post and the sleepy routine aboard Flight 93 as a quiet, ordinary day turns to chaos.

Initially brought in as an adviser on the film, Sliney then was cast in a small role as an air-traffic controller. Later, director Paul Greengrass ("Bloody Sunday," "The Bourne Supremacy") decided to replace an actor cast as Sliney with the man himself.

"Ben was very good in that bit part, and I just thought, I can't think of anyone better to play Ben Sliney than Ben Sliney," Greengrass said.

When the filmmakers asked if he thought he could play himself, Sliney responded, "Well, I've been doing it for 60 years. I guess another hour or two wouldn't hurt," he said. "I told them, 'All right, I'll do it.' I do want to point out that I was their second choice, but I didn't want to hold that against anyone."

Sliney, 61, had worked as an air-traffic supervisor but left the FAA for private law practice. After retiring in 2000, Sliney went back to the agency as an air-traffic specialist, and nine months later, on Sept. 11, 2001, he took over as boss of the FAA's command center in Herndon, Va.

Making the movie was a surreal experience but also a great deal of fun, despite the sober subject matter, Sliney said. Other than a heightened sense of intensity the filmmakers sought in his demeanor, Sliney said "United 93" accurately depicts the Sept. 11 scene in the FAA command center.

The outgoing, garrulous Sliney found it fairly easy to perform as himself in front of the cameras. He said his hardest task shooting the film was seeing United 175, the second plane to hit the trade center, strike the tower again and again on a giant TV screen in the command center set.

After initial takes to capture the actors' reaction as the plane hit, Sliney began averting his eyes, looking toward the TV screen but not directly at it, to avoid seeing the painful footage again.

"Controllers don't really identify a plane as having people on it. You know it intellectually, but you would drive yourself insane if you were constantly thinking, if I lose one of those planes I lose 200 people," said Sliney, who now works as an FAA operations manager in New York City. "So you think of it in the abstract, as a target, without thinking about the people on board.

"But that day, it was nearly impossible to separate it in your mind and not think about all the people who died."
By David German, AP Movie Writer